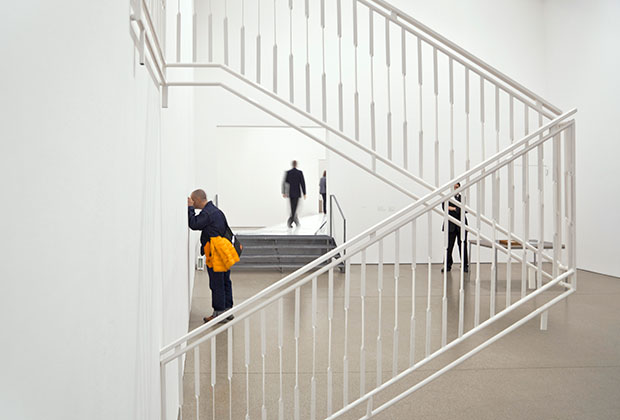 Escape to the outside world, via the single wing of an aeroplane: this can summarise the latest exhibition on display through June 18 by Slovak artist Roman Ondák at Deutsche Guggenheim. Known for presenting simple, subtle, yet unsettling works, such as his decision to represent his homeland with an abandoned pavilion at the Venice Biennale in 2009, Ondák is back with a new installation after having been awarded the title of Deutsche Bank Artist of the Year 2012.

Do Not Walk Outside This Area contains a selection of Ondák’s recent works, laid out across three rooms. The installation begins with Awaiting Enacted (2003); a small selection of Slovak newspaper clippings with one thing in common: every accompanying picture – no matter the subject of the article – has been replaced by one of people standing in a queue. On a nearby table lies a 1960s mechanical calendar; broken and no longer in use. Across the room is a tiny keyhole, allowing visitors to furtively gawk at the passersby on busy Unter den Linden.

Order and challenges to order are clearly the main theme on display, and here we see it beginning to crack and give way to an alternative, outside world. Indeed, another doorway leads directly onto the disembodied wing of a Boeing 737-500 used as a footbridge. The centrepiece of the installation, Do Not Walk Outside This Area replaces one set of rules and boundaries with another; allowing you to walk on the wing of an aeroplane, yet – as is indicated on the wing itself – not outside a designated area. Waiting beyond the tip of the wing is Ondák’s 2010 work, Balancing at the Toe of the Boot, which features a series of postcards and photographs of the artist and his wife on holiday in Calabria – an idyllic, yet unstable region of southern Italy. Stamped onto the backs of each postcard is the same, simple message: “WE ARE STIL ALIVE”.

Do Not Walk Outside This Area reads as an almost narrative sequence, using subtle perversions of everyday constructions and images to tell a story of one’s escape from a world of order and boundaries. The simple and straightforward approach feels somewhat underwhelming at first glance, though – with the help of some conscious reflection – it does manage to elicit a visceral feeling of unease over time. After all, it’s not every day that many of us get to set foot on the wing of an aeroplane and survive.

Do Not Walk Outside This Area, through June 16 | Deutsche Guggenheim