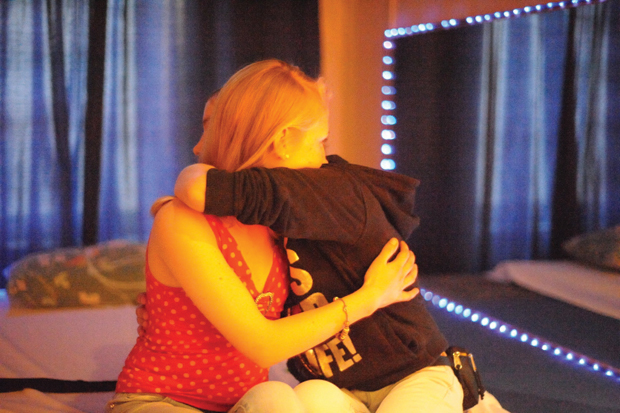 What does it mean to be alone with a work of art? The new exhibition at KW attempts to answer this question in 14 different ways. As opposed to objects lit and trussed up for consumption, curator Susanne Pfeffer presents a collection of unique experiences. One on one comprises individual encounters with specially commissioned artist projects spread like constellations across the whole gallery space. In the open structure, visitors take their own route navigating the microcosms of activity on offer, ranging from Robert Kusmirowski’s huge installation with a disturbing edge to Annika Kahrs’ duo of piano players as well as a hypnotic video by Berlin-based Jeremy Shaw. Enter the bold, the brave and the curious…

What have you chosen to address in One on one?

It will play with the idea of living, of inside. To have a different way of experiencing the space of an institution. It’s not a safe show. It hasn’t been proven. As far as I know, it’s never been done anywhere. What I also like about the exhibition is the resistance. It’s not easy to consume.  It is totally unpractical to do an exhibition like this. But on the other hand, it’s a way to perceive art that is quite unique. The work defines the space, and you’re only allowed to go in the space on your own.

Why is one-on-one so important now?

I think we’re bringing back a certain intimacy in the reception of art. Museums are getting more and more gigantic. It’s not really a critique, but I think that in certain ways art is becoming consumable – you just pass by. Or when you’re in a blockbuster show, and there’s so many visitors you can hardly see the work. It’s interesting to put something not so practical against this ease of consuming.

Were there any other works that inspired this idea?

In a certain way it was inspired by Chambres d ’Amis. It’s a concept by Jan Hoet which the Berlin Biennale did, where he invited artists to produce works for private homes and empty buildings. I think this somehow inspired the concept. If you show art in a private context, you always have this intimacy, and it inspired me to bring this intimacy to an institution.

You talk about intimacy, but judging by those boxers on the show’s poster, the main theme is confrontation.

The poster’s playful. We don’t want to hurt anybody. [Laughs] They’ll be confronted, and it’s also radical in a certain way. But we have some works that are really silent, not everything is loud. It was not the idea to make something entertaining – “Wow, I’m alone!” It’s also about this kind of silent reception, which is quite new for a group show. It’s another way of perceiving. But yes, it’s also to confront and I think the reaction will be different.  It’s an experiment. To make it simple – it’s really to get involved with something, quite direct involvement.

What about boundary pushing? Are any of the works transgressive?

This exhibition asks artists to do something different.  I’m interested in what you perceive when you’re all alone. An exhibition isn’t like a concert, where you have a community. It also gets quite physical. One on one can be a simple sculpture – and ‘me’. Or even just a painting. Two bodies in a space. I think we will get a different view on bodies – how to deal with it and how to react. Some works are putting you into action, and some works are not.

So it’s extremising the idea of art as an individual subjective experience?

It’s extreme and it’s against our time, in which museums are getting like shopping malls. I’m totally against it.

But isn’t this individual experience playing even more into the idea of consumption? In an age where everyone has a screen on them at all times, isn’t one-on-one consumption of art becoming the norm?

I think it’s totally different, because it’s not virtual. With computers – maybe you’re on the internet and somebody replies, but you have to make the thing start.  Here it’s completely the opposite. The work starts the conversation or the dialogue. There was a study: in order to keep the movement, the flow, in a museum, a visitor can’t spend more than 30 seconds on a piece. Otherwise, the whole flow is stopped. To make the visitors as a mass is something that is done everywhere. And we’re putting something against this.

One on One, Nov 18-Jan 20 | KW Institute for Contemporary Art