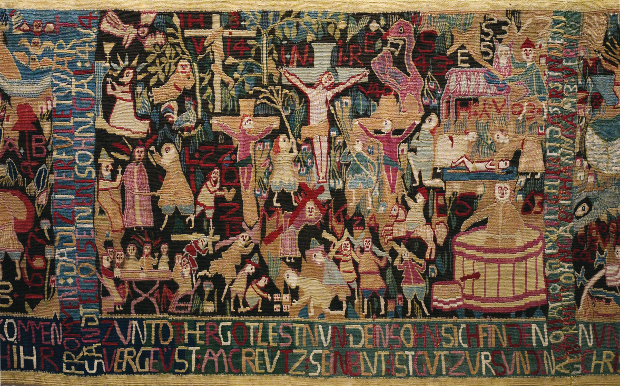 At the Museum of European Cultures, a 350-year-old weaving tells the story of the Reformation.

In 1667, 150 years after the publication of Luther’s 95 Theses, a 23-year-old woman in the northern German town of Dithmarschen wove a 3.5m long tapestry depicting the life and resurrection of Jesus Christ. Now, 350 years later, that work is on view at the underrated Museum of European Cultures in Dahlem as the centrepiece of Anna Weaves Reformation: A Tapestry and its Histories. The exhibition, which explores weaver Anna Bump’s everyday life as well as the circumstances and ideologies surrounding the tapestry’s creation, is one of several in Berlin that mark the Reformation’s 500th anniversary. The biggest one is the sprawling overview The Luther Effect. Protestantism – 500 Years in the World at Martin-Gropius-Bau, organised by the German Historical Museum. For a completely different take, head to the St.-Matthäus-Kirche near Kulturforum for “Scapegoating Pictures”, a series of vast mural-sized collages from Londoners Gilbert & George. It’s part of Luther and the avant-garde, an exhibition featuring 70 international artists that’s also installed over two locations in Wittenberg and Kassel.