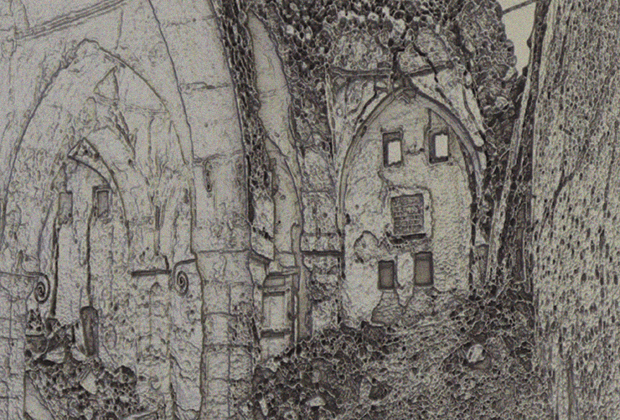 For the group show Where the Place Begins at Kunsthaus Dahlem, also opening this month, Fattal contributed a beautiful sound sculpture that remixes Wagner to awaken emotional ghosts for the visitor. But there’s another kind of ghost present at his solo show: that of Fattal’s lost Iraqi heritage, which he laments along with the disintegration of his ancestral homeland.

What is your show at AJL all about?

It’s about the structural disintegration of modern Iraq. I’m Israeli, but my family is Iraqi, both parents born and raised in Baghdad.

How does your own sense of identity as an Israeli with an Iraqi background come into play in the show?

It’s definitely directly about my own heritage, questioning why I abandoned it so quickly when I decided to only be Israeli. Really, society decided it. I was too small to understand. Watching the first and second Gulf Wars as a kid, seeing Baghdad, where my family came from and lived for centuries – it was a weird experience. I’ll probably never see it, not with my parents, that’s for sure. It’s a very enigmatic part of my identity. But in a broader way, the show is also a continuation of the themes of my previous exhibitions: the memory of architecture in the context of political events.

It all started with music, right?

Yes, for the past six months I’ve been working on a music piece. The initial idea was to take the “Farewell” symphony from Haydn. The piece dissolves a complete orchestra into one instrument – each musician blows out his candle and leaves the stage. I wanted to make a piece that starts with the rich music of all these different ethnological backgrounds from Iraq, and slowly kind of dissolve it. I’ve been working together with an Israeli musician. We send a violin sequence to different exiled musicians, who add their own music and send it back. Once I started on the piece, I started thinking more and more about different aspects of the desolation of Iraq.

And that’s when you started working on the visual aspect?

Yes. As I was doing some research on the internet, I came across all these photographs of destruction, of Word Heritage buildings but also of religious buildings – churches, synagogues or mosques. I started to focus on photos from Arabic and Middle Eastern news sources. It was important for me to show the narrative constructed by the Middle Eastern news media, the coverage of their own history as it unfolds – not the usual Western narrative. Of course, many of those photos were shot for a purpose – ISIS boasting about their deeds, or local organisations documenting the devastation. You kind of ask yourself how much of it is real and how much is propaganda – or just an attempt at reaching people’s attention.

How did you use those photographs?

I worked with two formats. First, silkscreens: photographs I printed on aluminium with industrial dust and black desert sand. They mostly depict the process of destruction as broadcast by news organisations – you can see the Al Jazeera logo on them. Then there are 3D-printed reliefs based on photographs documenting the result of that destruction – mostly religious buildings in ruins, rubble, etc. They work as panoramic views of the aftermath, architectural landscapes of desolation. The idea was to make a frieze by putting them next to each other. It refers back to ancient depictions of victory over countries or enemies – friezes would narrate war and conquests. My frieze looks kind of old, but it’s actually printed with a 3D printer, based on an image of destruction from the internet – that was the main idea.

Is this your most personal exhibition?

I’ve always done subjects that were close to me on a personal level. First at the UdK, about how people related to me as being a foreigner here, being ‘the Israeli’ or ‘the Jew’. Back in the early 2000s there were not that many. I always felt exoticised and it didn’t feel so great. It felt very weird – in Israel, everybody is Israeli; in New York, half the people are Jewish. Then to suddenly find yourself here… All my work in the context of Germany is always through the glasses of being an Israeli. Germany and Israel’s relationship is so strong, especially with 20th century history, that for me it’s completely inseparable. My work about Mendelssohn and Albert Speer started when I did my first solo exhibition in Tel Aviv. It was an investigation of all these German ideas, like the Bauhaus, that were brought to Tel Aviv by Jewish immigrants escaping political persecution in Europe. In this exhibition, the works are more about topics that are more current, but they also try to understand the way the West is viewing the Eastern narrative in this region.