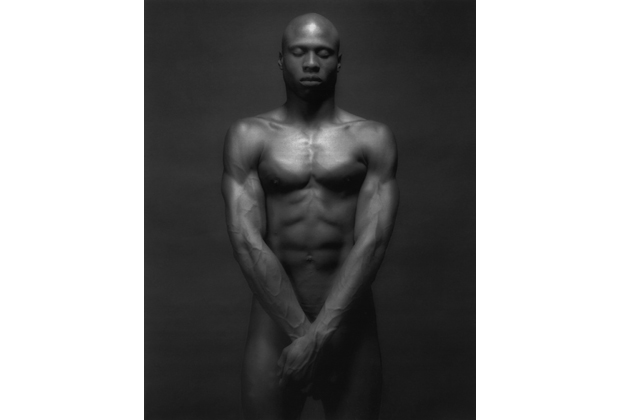 The threshold to Robert Mapplethorpe’s world is a single image. A threadbare American flag tugs at a flagpole in a cloudless gray sky. The stripes are ragged and the sun burns through federal stars. On the other side of the wall, a tiny, yellowing Polaroid of a young Mapplethorpe in leathers.

In 2010, Patti Smith won the National Book Award for Just Kids, the book that delivers her promise to a dying Mapplethorpe to “tell our story.” Robert loved Polaroids for their immediacy, she recounts. “I never liked photography. Not for the sake of photography,” explains a Mapplethorpe quote on the exhibition wall, “I like the object.”

C/O Berlin exhibits many of those Polaroids for the first time in Europe. They were taken in Mapplethorpe’s early years in 1970s New York, when he was living with Smith in the Chelsea Hotel. ‘Patti’ belongs to one of eight “chapters” that include children, flowers, and sex. The rigourous topical division pays respect to the formal integrity that defined Mapplethorpe’s pictures.

The 187 photographs make this one of the largest Mapplethorpe retrospectives ever and the first in Berlin. It’s beautiful. Patti Smith’s a capella version of “Because the Night” drifts from a video installation, wreathing images of drooping penises, erect flowers, children and leatherboys, female bodybuilders and sex acts, wrought as classical sculpture and Renaissance portraiture.

The sound of drilling and falling masonry intrudes – C/O Berlin’s Postfuhramt home is being gutted in a protracted but inevitable handover to developers. Another video documents Mapplethorpe’s career in encounters with the artist, his gallerists and lawyer.

The Catholic minister of his hometown church has a strange and interesting take on the role of the church in Mapplethorpe’s work. Devils and skulls, which always adorned Mapplethorpe’s studio, become prominent in later self-portraits, the artist haunting the background. Robert Mapplethorpe died of AIDS-related pneumonia in 1989. He was 42.