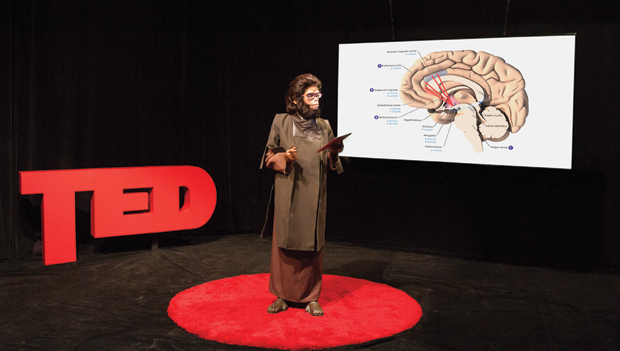 As part of HKW’s Ape Culture exhibition, Cuban-American interdisciplinary artist Coco Fusco takes cues from Planet of the Apes in her documented work “Observations of Predation in Humans: A Lecture by Dr. Zira, Animal Psychologist”.

Ape Culture presents various artworks alongside psychological, scientific and geological findings on primates over the years. Screened at the HKW throughout the exhibition and performed live by the artist on July 2, Fusco’s work explores ideas on why humans feel the need to destroy and why we have grown into one of the most aggressive species to walk the planet.

Can you explain your findings from “Observations of Predation in Humans: A Lecture by Dr. Zira, Animal Psychologist”?

I don’t want to give away the entire performance! What I can say is that in the original Planet of the Apes films, Zira, her husband Cornelius and Dr. Zaius all criticise the human society of their past (our present) as being overly obsessed with war and technology. The world dominated by humans is one in which other primates were abused and enslaved. Their ape society was created as the antithesis of human society.

You revive Dr. Zira for the performance. What brought you to her?

I saw the original five Planet of the Apes films as a child and liked them very much, but I don’t think I had a deep understanding of the social critique in the films when I first saw them. Much later, teaching courses on Afrofuturism, I began to discuss those films as analyses of race relations and racial conflict and my students responded very positively. I saw potential in the character of Zira – she is a scientist, a feminist, a pacifist and an advocate of interspecies cooperation. I decided to work with her to elaborate a vision of corporate greed and neoliberalism using the language of animal psychology.

Donna Haraway’s 1989 book Primate Visions: Gender, Race, and Nature in the World of Modern Science plays a strong role within Ape Culture and your own work. She begins with an unusual request, calling all primatologists, left-wingers, anti-racists, feminists, animal lovers, etc. to take responsibility and act after reading it. Did this bear any relevance on your piece?

Donna Haraway appears in my piece, but as for whether I am trying to create a performance that touches on all the political and theoretical issues you outline, I would have to say no. I focused on the issue of aggression in humans. I studied Zira’s character in the novel and the films. I try to embody and expand her range. I studied how animal psychologists view behaviour to be able to write a monologue that sounded like a scientist’s lecture. I use visuals because every professor does these days, even scientists.

Parts of the exhibition examine early efforts that were put into teaching apes to conform, or to become human. Your work seems to take the opposite role as you become an ape, albeit fictional – was this your intention, to retune our thoughts?

In the post-war period of the 20th century, there was great interest in trying to prove that other great apes could learn human language. Chimps were also used for early space travel and drug testing. In primatology, the book Chimpanzee Politics was very influential – it demonstrated how chimps organised themselves politically and socially. Politicians read it and endorsed it as a study that showed how Machiavellian other primates can be. In short, the barriers between humans and apes began to become blurred. Court cases about the ethics of using chimps for drug testing emerged as well. It was in that context that Planet of the Apes became a hit movie. One might say that the culture was ready to see great apes as capable of organising a society for themselves.