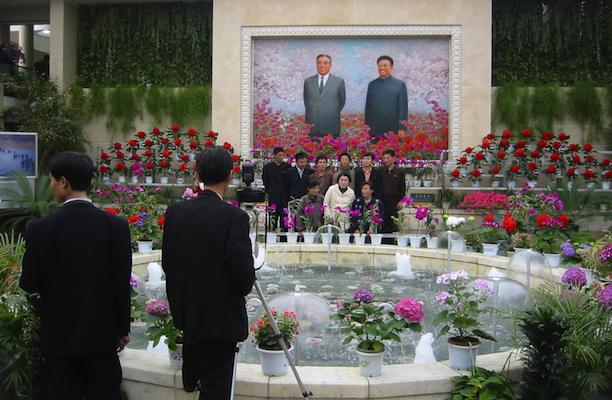 Home to the HKW since 1989, the emblematic US-commussioned Kongresshalle (Berlin Congress Hall) forms the (literal) entry point to this intersection between architecture and ideology.

Designed by Hugh. A Stubbins, the Kongresshalle was built atop an artificial hill so that its 1956 message of liberty would be visible from across the border in the Soviet Zone.

The politically assertive futuristic design (affectionately nicknamed the ‘pregnant oyster’ for its wing-like roof sloping between two arches) is reinterpreted as a large-scale sculpture.

Featuring ten site-specific productions by international artists and architects, including Amateur Architecture Studio’s “The Theatre” (60,000 Chinese tiles recycled from the Venice Biennale and installed on the HKW roof) and Berlin-based Arno Brandlhuber’s “Garden of Ideologies”, which explores the tradition of dedicating orchids like the “Dendrobium Angela Merkel” to heads of states. Catch a sneak preview here.

Read our interview, “Letting a new light in”, with the exhibition’s curator Valerie Smith.