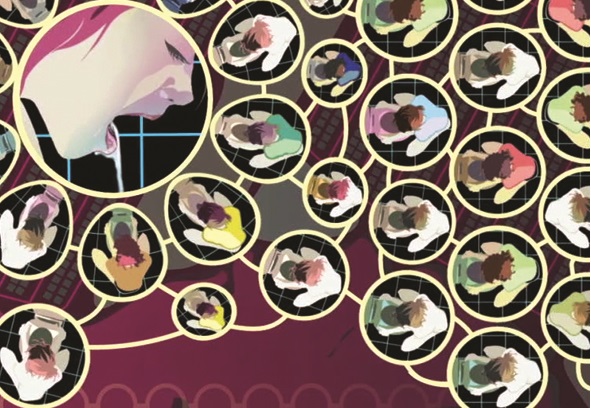 Disruption Network Lab’s A Game of You is on at Kunstquartier Bethanien from August 8-9.

Is it all just a game? Are we simply pawns of the grandmasters of social media or do we have some control over our next move? On August 8 in Kunstquartier Bethanien, Disruption Network Lab presents the conference A Game Of You. Who’s playing? Israeli graphic novelist Gabriel S. Moses – best known for his graphic novel Spunk, published here in Berlin in 2010 – heads up a talk on gameification and narration in social media: its positive, negative or just curious implications.

Being from a graphic novelist background, how did you become interested in these questions of online life?

I remember sitting with a girlfriend in Tel Aviv around 2005. We were both a part of the Israeli punk subculture, and a lot of fans of bands in the scene at the time had started creating their own Myspace pages. So my girlfriend showed me her Myspace profile, which was all pink and radiant with unicorn stuff flying around and her little profile picture and balloon bubble saying what her favourite song was at the time and this or that quote. I was looking at it and thinking: that right there is the future of comics! It adheres to the exact same principles.

In comics you have this framework that orders image and text in certain relations and breaks them apart in order to convey information. And the same goes with social networks. In my opinion they’re growing closer and closer together, especially with the Facebook timeline, which Myspace and earlier networks had already suggested, only Facebook spread it on an “infinite scroll” – which in itself was an idea of comics theorists. It’s like a certified biography, which you compose together with Facebook.

How do comics come into the picture?

Because once you start analysing these platforms through the outlook of comics, you also start questioning what type of comic they would be. How am I supposed to read this story? What liberties do I have? What is the difference between this model and that model? I think that, at least for a less academic crowd, it’s an eye-opener to start thinking what happens when you’re urged to perceive your life as a story . Someone is forcing you to gamify your life, telling you that its fun and using this prospect of “fun” to, in a sense, imprison you.

What’s your theory on this gamification and narration of the self?

Basically we have all bought into this idea of online gameification and narration of reality, which social networks like Facebook are pushing on to us, wherefore we are experiencing our life as if it were a story: as if it were a game. And if we do not become aware of this, we’re in big trouble.

How are we in trouble?

We’re in danger if we don’t understand the extent of the control that these systems have on us. Talking about Facebook is like talking about the state: You live in it. You need to be active in it and understand what is happening. But most of the time, the control mechanisms are concealed and suggested under the guise of a certain kind of freedom, which you think you have, but you do not necessarily have.

What does that mean?

It means that interactivity offers a very different form of engagement than simple authored narration. You can affect the narrative, so to speak. Zou can change the narrative, and you can – to a certain degree – even cancel the narrative. But is Facebook the author or are you? Are you writing or are you playing? What is the difference between narrative and discourse there? Is a chat a dialogue inside of the story or a gamified discourse?

What is that element of fun you spoke of?

Do a quiz, share something, and get some kind of reward. Online, I see a dynamic tension between t w o principles: There’s the pleasing ‘reward principle’ and the ‘anxiety principle’ – the fear of missing out . But the tension between these two elements is a bit sedated because you always feel like it’s just on your screen, it’s virtual, the implications couldn’t be that big, so I’ll just click this right here. But once you see these rampant public shaming campaigns that result from one naive tweet, you realise that it’s not exactly another sphere and that there is no such thing as an absolutely autonomous cyberspace.

What’s your position in all of this?

My position is first and foremost as an artist, which practices my version of artistic research. It’s not conventional academic methodological research. It is there to blur lines and not define them: it is there to fuck shit up and not adhere to certain protocols.

So is this all about making people delete their Facebook profiles?

No! I’m a media whore and a walking contradiction in a sense, and Facebook isn’t that kind of fascist regime, directly responsible for holocausts, which you should overthrow. But it’s one of the main convoys through which we experience life, and so we need to heighten our awareness and figure out a way to do better and not worse within it. I’m not trying to compel people to go offline. And I also think that when something exists, its sort of there to stay. Especially today: the Internet does not forget, as they say. It’s not like you can burn the documents.

And your “book” is still there for people to read, just like mine is.

Yes, but you have to try to own it as much as you can. Own your own narrative! Become an agent of your own persona.