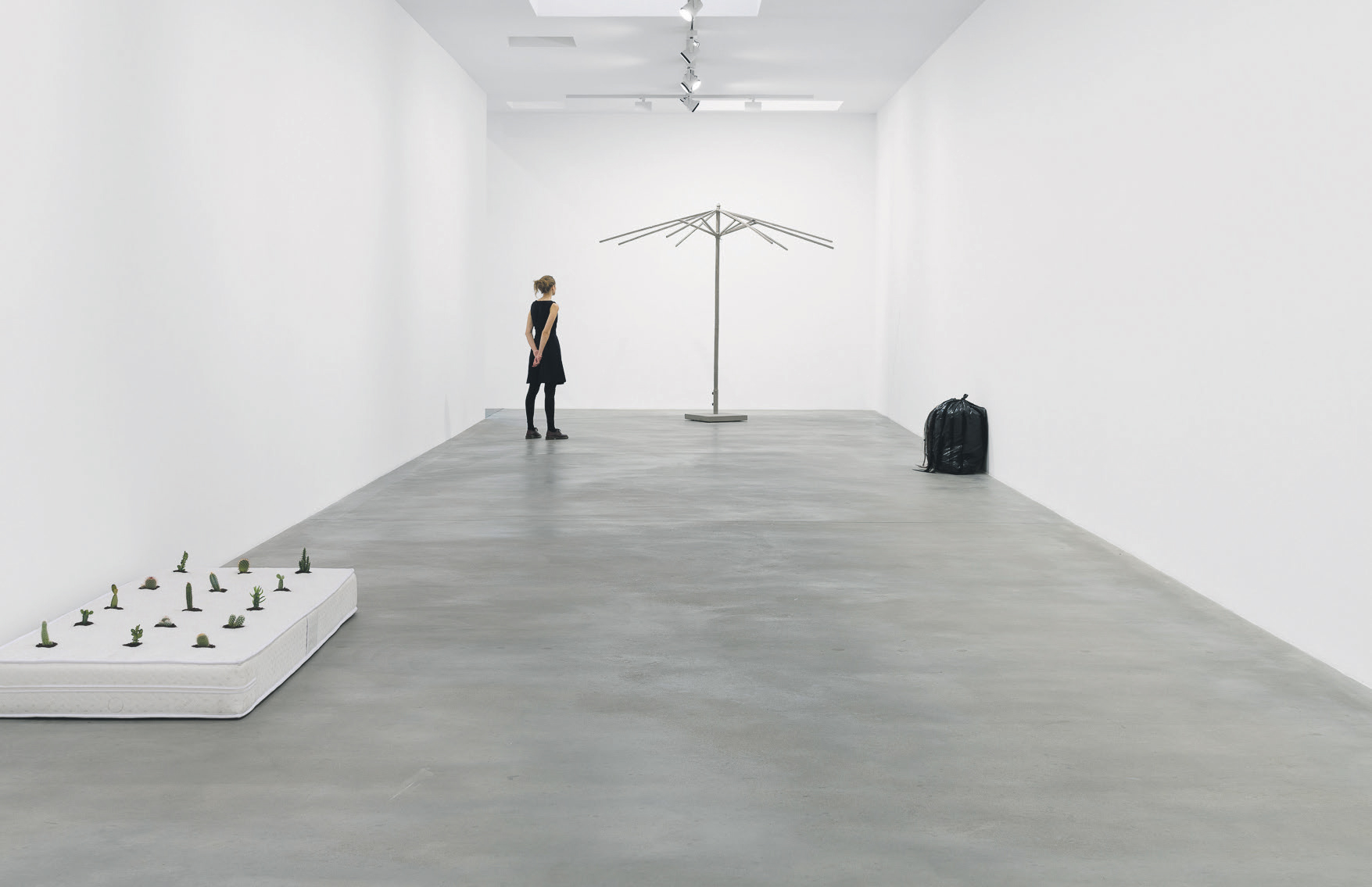 “Migration” is the culture scene buzzword of the day, and ever more exhibitions on the topic are migrating into Berlin galleries.

We don’t have many nomadic communities left these days, but human migration still forms, and informs, our lives. It’s especially true here in Berlin, where our increasingly international art scene is dominated by conversations about expats, immigrants, refugees and post-colonialism. Following an appearance representing his native Kosovo at this year’s Venice Biennale, New York-based Sislej Xhafa joins the discussion with his exhibition at Blain Southern, shadow of curls (photo). While Lost and Found in Venice was a phone that never rang for all the missing relatives from the Kosovo war, Xhafa’s Berlin exhibition is less specific and more poetic. Here familiar and ready-made objects (trees, lighters, sheets of plastic) are positioned and combined to create new meaning. In “still life on left lane”, a chandelier is placed in a plaid plastic bag, familiar to migrants from nearly every continent, provoking hope in a better place that has not yet been reached.

Meanwhile, Reframing Worlds, the new multi-part exhibition at Galerie im Körnerpark and NGBK, takes a look at “Mobility and Gender in a Postcolonial, Feminist Perspective” via works by 16 Berlin artists from a multitude of backgrounds. The exhibition highlights a range of historical female figures, from Agatha Christie to Sayyida Salme, the princess of Zanzibar, but the general focus is on telling life stories. Maria Thereza Alves’ “Wake: The Flight of Birds and People”, for example, chronicles the seeds of non-native plants found in Dubai as a refl ection of the many natural and unnatural forces that have affected this desert oasis. And in Katrin Winkler’s two-channel video installation “Towards Memory”, four Namibian women tell their story of being sent to the GDR during their home country’s struggle for independence in 1979, and subsequently deported after the fall of the Wall. Following the NGBK exhibition opening on December 1, join academics Aïcha Diallo and María do Mar Castro Varela for a discussion on “Colonial Encounters, Postcolonial Reflections” (Dec 9, 7pm).

For something a little less heady, go for a falafel at Orient Express. At Galerie Wedding, Berlin-based Finnish-Israeli artist Dafna Maimon shares the story of her father, who opened Finland’s fi rst falafel and kebab restaurant in a Helsinki shopping mall in 1985. By restaging and recombining elements from the original Orient Express (including a video ad her father produced for the restaurant in 1986) with her own migratory experiences, Maimon uses performance, video and installation to sort through memories and familial relationships relevant to us all. Find out more through an exhibition tour with Maimon and curator Solvej Helweg Ovesen on December 14 at 5pm.

Later that evening (6-10pm), catch the premiere of the new video project from artist, performer and Black in Berlin salon creator Jessica Lauren Elizabeth Taylor. Made in collaboration with Astrid Gleichman, My Mother’s Land/Müttererde features conversations with six women of the African diaspora discussing what has and has not been passed on through their matriarchal lineages. It’s part of District Berlin’s queer fairytale exhibition When the Sea Looks Back. A Serpent’s Tale, on view through December 16.

The Many Headed Hydra #02: When the Sea Looks Back. A Serpent’s Tale Through Dec 16 | District Berlin, Tempelhof