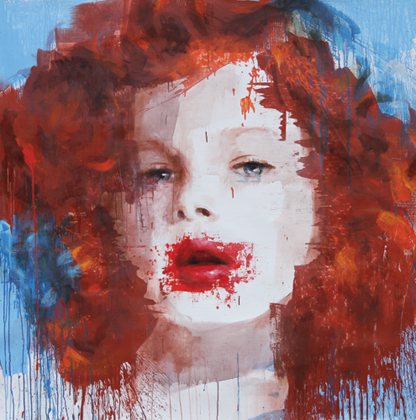 Luigi Christopher Veggetti Kanku’s canvasses are as large and wide as his name. His studio is a mess of tools and paints, brushes, and a discreet pianoforte in the corner, which he proudly points out.

Veggetti explains that his current working process is motivated by his idea of memory, and the way it tends to fade, misplace, and eliminate. After painting his canvasses in acrylic and oil, making them accurate and detailed, he eats at the paint with acid, scratching away its surface to reveal the complexity of layers and producing an interesting contrast between the thickness of the paint and the acid-stained areas which he chooses to eliminate. It is as if his canvasses had been weathered in the garden and stained by rain. They feel raw and intimate.

The young and enthusiastic artist’s ideas drives these aesthetically pleasing paintings forward. He plans to move beyond painting, in order to engage in a discourse about art and cultural production. His two running themes, landscapes and portrait, create an interesting contrast. From the extreme proximity and beauty of the female faces to the anonymity of the silhouettes depicted in his cities, the canvasses are something reminiscent of faded 1950s postcards, or a lover’s somewhat confounded gaze on their partner.

Veggetti’s current project sets an interesting pace to his work. Working together with Forte Dei Marmi and its museum, he has produced a necklace composed of 10 numbers. Every number stands for a city, from which a series of paintings is created. Originally attracted to painting Forte dei Marmi’s sea and its marina, Vegetti has undertaken the project in order to create a new perspective on a much-viewed subject. For example, Turin’s contrast between the clean and well cared-for city centre, and its periphery, abandoned and empty, is the reason behind Veggetti’s inspiration to paint it.

Seeing Veggetti’s current projects, and the ambition he holds behind his work, it is amusing but very fitting to think that it all started as a game, a competition between him and his sister to see who could create the prettiest painting. Having moved beyond those ambitions, Veggetti presented his work to an artist who told him, “Devi dipingere, continua” (you must paint, continue). And so he does.