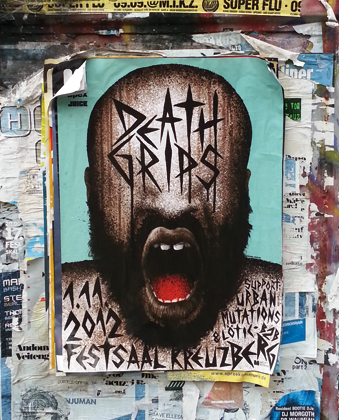 Hungry freaks and gory disco skulls, the ambassadors of a city and a subculture, peer out of vibrantly coloured posters. “There is nothing more appealing to me than an interesting face,” Stefan Fähler says. Through symbolic illustration, the Greek-German, Berlin-based artist creates faces that tell stories. Accessibility is the key to the ransacked guises of Fähler’s giddy, goopy figures, whether a blind schoolgirl or a freshly dismembered phallus.

It has only been three years since Fähler branched away from political campaign art direction and promotional drawing to become an independent artist, yet his works can already be found all over Berlin: album artwork for Hanin Elias, Marina Gasolina, Leslie Winer and Damo Suzuki; music videos for Mediengruppe Telekommander and Crime; and countless gig posters for everyone from Death Grips to Mudhoney to KitKatClub’s infamous Gegen parties. His work has also been featured in exhibitions and publications in New York, Los Angeles, Sydney, São Paulo and Basel.

Fähler dodges violence yet retains maximum gore, even in an otherwise aggressive pictoral landscape. Embracing carnal behaviour and bodily fluids, he never forgets the cherry on top, the whimsy. An extra limb here, an open wound there, always something with a poignant surrealist twang. Pregnant curves and mutated, suggestive profiles tell their own story, steering away from traditional portraiture.

Fähler leaves the private studio behind in favour of creating most works outside, on the go. His pictures are a collage of watercolour and digital photography, but are aesthetically tied to neither. The minimal integration of photo-real components does not allow for loss of gesture. The greying-out and material manipulation of the ink makes the palettes blaze like unkempt neon. He moved to Berlin in 2001, which makes the city an intrinsic part of his body of work. Here it’s okay to be an aberration, even beautiful, just as long as it is embraced.