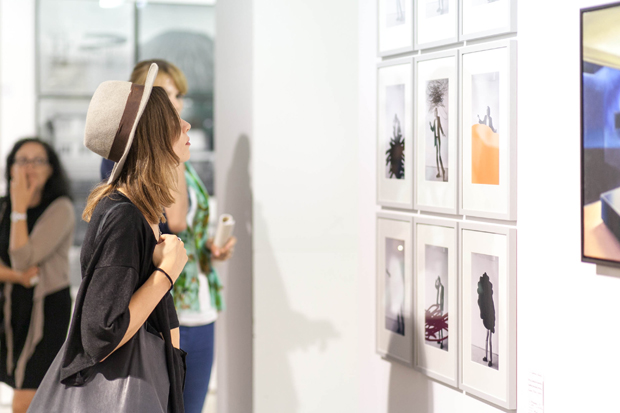 Berlin Art Week – or as we like to call it, the art avalanche – is just days away. From September 15-20, countless intriguing exhibitions will fill art spaces across the city, but there’s no way to see them all in five days. So pull out your planner: we’ve put together a full yet concise schedule of openings, performances and parties just for you.

18:00 This year’s BAW official exhibition programme is centred around Stadt/Bild – Image of a City, an institutional response to the question of how space and individual experiences are defined in an increasingly urbanised world. It includes the KW Institute for Contemporary Art (Welcome to the Jungle), Berlinische Galerie (The Dialogic City), Deutsche Bank Kunsthalle (Xenopolis), and Nationalgalerie (Fluids. A Happening by Allan Kaprow). All four open simultaneously, but you’d need superpowers to make it to every one. Instead, start at KW for an exhibition that promises an unexpected experience straight from the get-go. Berlin-based and international artists such as Awst & Walther, Julius von Bismarck, Ulf Aminde and more will explore the nuanced terrain of the “urban jungle” and the desire for wildness that comes from leading domesticated lives. (Auguststr. 69, Mitte, through 22:00)

19:00 Head to Kreuzberg for double-solo openings at Chert that will likely leave you pondering labour, process and form. Carla Scott Fullerton will show sculptures composed of used silkscreens covered with ink atop painted bricks in “If these walls had ears”, and Tyra Tingleff’s “I gave the postman your name” will fill the vitrines in the outdoor courtyard with abstractly rendered, raw canvases. (Skalitzer Str. 68, Kreuzberg, through 22:00)

21:00 Nearby, the opening of nGbK’s Redemption Jokes will be well underway. Works by Oreet Ashery, Bjørn Melhus, Young-Hae Chang Heavy Industries and more explore the role of humour in art today, as a form of social criticism or confrontation of cultural phobias. If you get there by 9pm you’ll catch two performances, Studio Spektral’s Process of Disappearing and the tail end of durational performance artist Dolanbay’s Negating Blank Part 2. Stick around for a DJ set at 10pm in the courtyard with Studio Spektral and special guest Kurt Ernst. (Oranienstr. 25, Kreuzberg)

10:00 While you should conserve your energy for the endurance-gallery-hop later on, don’t miss one of five “happenings” presented by the Nationalgalerie around the city, originally conceived by now deceased Fluxus artist Allan Kaprow. Kaprow’s original piece proposes that a group of collaborators construct a large structure out of ice blocks, and then let it melt. Today Antje Majewski, Olivier Guesselé-Garai, Assaf Gruber, Agnieszka Polska, and Juliane Solmsdorf will re-envision Fluids near the Berliner Stadtmission in Moabit, a place where refugees, recently released prisoners and homeless people live or receive day services. After demarcating a space the size of Kaprow’s original structure, they will “build it” by placing useful objects within its “walls”. At 4pm the “melting” begins and anyone who is around will be invited to take objects with them. (Corner of Lehrter Straße and Seydlitzstraße, Moabit)

17:00 See luscious infrared portraits by none other than Jacob Appelbaum, Berlin-based American activist-in-exile. NOME hosts his first solo exhibition Samizdata: Evidence of a Conspiracy including the portraits, which both picture and pay homage to political dissenters, as well as “Panda to Panda”, his collaborative piece with Ai Weiwei made up of stuffed plush panda bears that conceal not fluff, but shredded Snowden documents and SD cards. A third body of work, Schuld, Scham und Angst (Guilt, Shame and Fear) is also a collaboration, with Manuela Benetton, Berit Gilma and Lusi Tornado. (Dolziger Str. 31, Friedrichshain, 11-18:00)

18:00 Berliner Liste will open its 12th edition at Kraftwerk to art collectors and fans of newer artists. We’ll be stopping by Gallery Ho, a NYC gallery that represents a group of young conceptual artists from across Asia, as well as the artist booths to see Suet Yi Chan’s unsettling illustrations and Jürgen Bosse’s soft-focus pinhole images. (Köpenicker Str. 70, Mitte, through 22:00)

19:00-21:00 All the galleries showing at ABC (opening tomorrow) will have openings on their home turf, thus ABC Gallery Night will be a big one. We’ve chosen one path, but there are many others!

Start at Peres Projects for Marinella Senatore’s solo Scenografia. While the artist is known for massive collaborative film projects (Rosas, a three-part opera, involved 20,000 people!), here the space will be filled with what’s left afterwards – film sets, ephemera and Senatore’s own sculptures and drawings. (Karl-Marx-Allee 82, Friedrichshain)

Next, head to Kraupa-Tuskany Zeidler for artist collective Slavs and Tartars’ Dschinn and Dschuice. The exhibition presents artistic research on, amongst other themes, language as a form of religious or sacred communication and delves into the role of Arabic as one of the often overlooked languages of Christianity. (Karl-Liebknecht-Str. 29, Mitte)

Don’t miss the opportunity to get better acquainted with the work of Hito Steyerl in her first gallery exhibition in Germany, Left To Our Own Devices. All five films on view in her solo at KOW were made from 2012-2014 and collectively convey the wide reach of her interest in dissecting and criticising sociopolitical norms both in and outside the art world. (Brunnenstr. 9, Mitte)

Get to Galerie Thomas Schulte by 8pm to catch the last hour of Michael Müller’s Zweite kleine Probe für Nietzsches Geburtstagsparty 2313 (Second Small Trial for Nietzsche’s Birthday Party 2313). The performance comes in the form of a rehearsal for an imagined future party, including 15 performers and musicians, and incorporating objects from the two concurrent but independently titled exhibitions by Müller, in the main gallery space and in the window spaces. (Charlottenstr. 24, Mitte)

11:00 Start your day at Akademie der Künste’s Hanseatenweg building. There, the 2015 Käthe-Kollwitz-Preis winner Bernhard Frize will show systematic paintings that abide by a hidden set of rules, unique to each individual piece, that according to him, must be activated by the viewer. (Hanseatenweg 10, Tiergarten, through 19:00)

16:00 ABC (Art Berlin Contemporary) opens at Station Berlin in the afternoon and you’ll have to decide if the reduced ticket price (€12, down from the normal €20) will be worth fighting the crowds. We’ll be stopping by Peres Projects with Marinella Senatore, who’ll reinstall a tea bar, originally present at one of her film productions, that will give out free drinks during all hours of the fair, as well as Delmes & Zander with Günther K.’s methodical documentation of his affair, Bischoff Projects with He Xiangyu, Sprüth Magers with Lizzie Fitch & Ryan Trecartin, and Galerie Koal with Jeanno Gaussi. (Luckenwalder Str. 4-6, Kreuzberg, through 21:00)

17:00 If going to two art fairs in a row is not your idea of a good time, or if you want to at least take a break for a bit before heading to Positions, head to the group show Arcadia Unbound. The local and international artists’ works are curated to respond to the former GDR radio and television broadcasting hub, Funkhaus Berlin. (Nalepastr. 18, Treptow, 14-18:00)

12:00 Start your day by seeing how the interactive exhibition at NBK (Neue Berliner Kunstverein) is coming along. In Gustav Metzger’s Mass Media –Today and Yesterday (1972/2015), visitors are invited to pick from massive stacks of newspapers collected by the artist since 1972, cut out pieces and then hang them on the walls. The viewer becomes the collage artist with an ever-growing list of collaborators. (Chausseestr. 128/129, Mitte, through 18:00)

15:00 We’re guessing that by this point in the week, we’ll be ready for Carmen Loch’s installation Stendhal Labor, an escapist “performative oasis” from the hustle of the week, in both Erratum and Vesselroom Project in Kreuzberg. The event is part of the Project Space Festival Xchange, which will bring together five pairs of small art spaces for a series of exhibitions in dialogue, based on shared content and concepts. (Böckhstr. 40 and Adalbertstr. 4, Kreuzberg, through 21:00)

19:30 Venturing out of the city centre to go to the opening of Alicja Kwade’s solo at Haus am Waldsee will be well worth it. The Berlin art scene darling’s reality-provoking mixed-media works exist at the intersection of simple form and complex concepts. Here she delves into nature, showing rocks, metals and branches that are more than they appear. (Argentinische Allee 30, Zehlendorf)

21:00 Continue onto the Project Space Art Awards and Party at Bar Babette. After Tim Renner gives out the Berlin Senate Chancellery for Cultural Affairs fine arts programme awards earlier in the evening, the party will begin, with music by Jealousy Party & JD Zazie, Namosh and DJ B.Side. (Karl-Marx-Allee 36, Mitte)

13:00 If you missed the opening of nGbK’s Redemption Jokes or want to learn more, join the English tour led by the curators. Registration is required, so send an email in advance to [email protected]. (Oranienstr. 25, Kreuzberg)

15:00 Laure Provoust’s Dear dirty dark drink drift down deep droll (in der dole) at carlier|gebauer brings together disparate yet overlapping mixed media works, from “Into all that is here”, a video pairing shots of flowers with bold text about desire, to an installation of her conceptual artist grandfather’s library. (Markgrafenstr. 67, Kreuzberg, 11-18:00)

16:00 Check out Monika Grzymała’s solo The Making of Forming Something New at Galerie Crone. On view will be hundreds of drawings Grzymała made while recovering from an accident, faxed by the bed-bound artist to Reykjavik Art Museum for a group exhibition there in late 2014, as well as two tape sculptures, photos and sculptures. (Rudi-Dutschke-Str. 26, Kreuzberg, 11-18)

20:00 End your day at Heimathafen for the KGB Night of the Artist Bands, the capstone of the KGB (Kommunale Galerien Berlin) Art Week running alongside the BAW. Entrance is free to see performances by Sound 8 Orchestra, Aftermars, Parabelles, Stereototal and T-INA Darling. (Karl-Marx-Str. 141, Neukölln)

11:00 Start with the Preis der Nationalgalerie exhibition of nominated artists up at Hamburger Bahnhof. On the shortlist are Christian Falsnaes, Florian Hecker, Anne Imhof and Slavs and Tatars – all under 40 and either living or working in Germany. Since the winner will have been announced the Friday beforehand, you’ll get to decide if you think he/she/they were the deserving party. (Invalidenstr. 50-51, Tiergarten, through 18:00)

13:00 Go see Paul McCarthy’s audacious solo at Schinkel Pavilion, featuring an exact replica of the artist himself, lying naked on a table, lifeless. Also Rebel Dabble Babble, a theatrical installation created by McCarthy and his son Damon McCarthy will run through the 27th at the Volksbühne (Rosa-Luxemburg-Platz, Mitte). Don’t miss either of the art world legend’s phenomenal shows. (Oberwallstr. 1, Mitte, through 18:00)

15:00 Camille Henrot’s solo at König Galerie, The Pale Fox, should be seen in person. Her installation brings together everyday objects against blue walls that, when accumulated, read as an anthropological survey of contemporary image culture. Everything from sculptures, posters and fresh fruit almost become icons on an otherwise blank screen. (Alexandrinenstr. 118, Kreuzberg, through 18:00)

16:00 Across the BAW, many private collections will open their doors for special viewings. We’ll make our way to Fahrbereitschaft’s exhibition music, a special curation of artworks on musicality by the likes of Edgar Arceneaux, Isa Genzken, and Phil Collins at Sammlung Haubrok. (Herzbergstr. 40- 43, Lichtenberg, 12-18:00)

18:00 A Space is a Space is a Space at DAZ (Deutsches Architektur Zentrum) brings together three curators and a large group of artists from Kader Attia to Rosmarie Trockel in an interactive exhibition on performativity and public space. (Köpenicker Str. 48/49, Friedrichshain, 14-19:00)

If you can’t make them all, don’t be discouraged. Most of the BAW exhibitions will stay up through the end of the month!