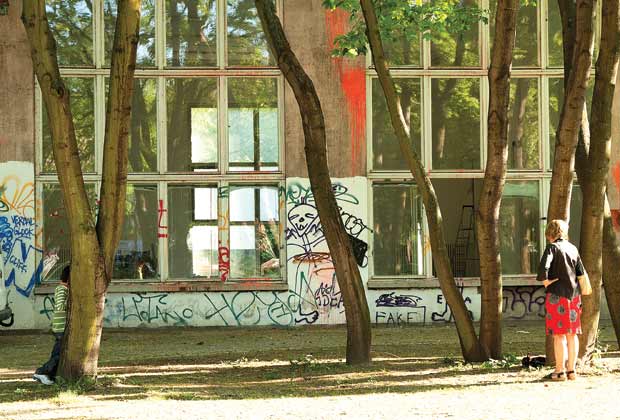 With 1250 responses to an open call for artists and an estimated 1000 studio visits, selecting the participants was the first obstacle. “We set the criteria ourselves, out of necessity. We had to focus our attention,” says Weaver.

The curators say they concentrated on ‘young’ artists, but by this they’re not referring to actual age. In this case, being young is a matter of having ‘emerged’ in the last five years; those chosen have not enjoyed great institutional visibility. “A young artist could be 80, 85 years old,” Campens points out.

The second determining factor: the city. The work and lives of the 80 selected artists are, as the show’s title suggests, based in Berlin.

As no stone was left unturned and no second-tier courtyard left unchecked in the search for the art being made in Berlin, no medium is excluded. Events take place every day and include everything from painting and sculpture to performance and video art. Many of the works will be created specifically for this exhibition.

Included in the show are Daniel Keller and Nik Kosmas, known collectively as Aids-3D. The self-described “hyper-productive” Americans don’t necessarily connect with the gallery scene in their adopted home, Berlin – Keller hails from Minneapolis; Kosmas from Detroit. Their fans find them predominately online, and their work has been shown internationally. But their profile fits the based in Berlin criteria, and gives Berlin a chance to appreciate their monumental, mixed-media works.

“Galleries have a much different role to play than institutions.”

In a city with hundreds of galleries and countless impromptu exhibition spaces, not to mention museums, Berlin’s love affair with art is hardly a state secret. But as Magiera says, “Galleries have a much different role to play than institutions.” However, even the largest of exhibition halls would be cramped by an 80-artist show. Finding a suitable venue was the next issue.

“When we started this process, we looked at Berlin in an organic way. What could the existing institutions offer, and how could we involve them?” Weaver says. But the heady institutions were eager to participate in the plan. KW Institute, Hamburger Bahnhof, Neuer Berliner Kunstverein and Berlinische Galerie have each offered up part or all of their space for the exhibition. Yet a primary location was still needed.

When the city agreed to postpone the planned demolition of the Atelierhaus in Monbijoupark, architecture firm Raumlabor started transforming it into the ‘epicenter’ of based in Berlin. “It’s a place where you want to hang out. There is a bar; the park is right there. The idea is that people will just be there, it’s a meeting point for the six weeks,” says Weaver. Serving as a full-scale production site before the opening, the Atelierhaus will be Berlin’s art capital for six weeks, and entrance is free.

“Somebody will be a discovery.”

In 2007, Schillinger was awarded a prize from the Körber Foundation for his film exploring the Mitte ‘hipster’ scene. Part social anthropology, part urban narrative, it serves as ideal preparation for curating based in Berlin. “It is really about concentrating and condensing, bundling all the things that are happening,” he says. But the exhibition is also about finding something new. Magiera adds: “Even for those of us in the art world, somebody will be a discovery.”

The initial concept for the €1.5 million exhibition stems from Berlin’s interminable Kunsthalle debate. Wowereit, a long-time supporter of a permanent venue for the city’s emerging art scene, hopes based in Berlin will encourage the local government to make a decision during the next legislative session. If he succeeds, and a new Kunsthalle is built, there are at least 1000 more Berlin-based artists waiting to ‘emerge’.