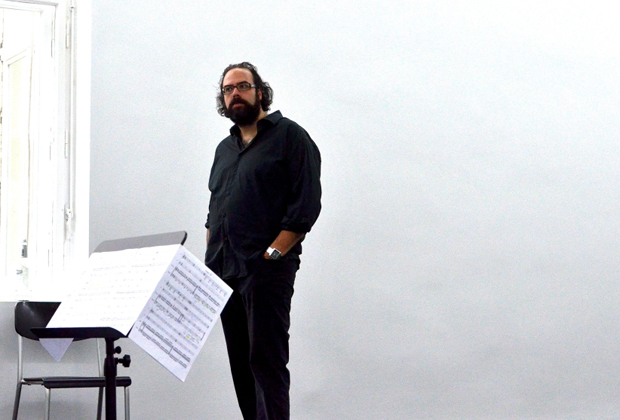 Berlin-based composer and conductor turned artist Ari Benjamin Meyers creates new music-art hybrids, paving the way with new ideas about the incorporation of music into the gallery and museum sphere.

Already renowned for his work with Redux Orchestra, Einstürzende Neubauten, Staatsoper Dresden and the Solomon Guggenheim Museum, to name a few, his focus has shifted from more traditional operas, symphonies and film music into a ever more experimental art context. His first solo exhibition at Esther Schipper opens September 7.

How did it all begin?

A major moment was il Tempo del Postino, curated by Hans Ulrich Obrist in 2007. It was a group exhibition staged in the Manchester Opera House. I was the music director, being thrown into the fire. It wasn’t just conducting, it was working with each artist to figure them out. They could use anything there, the orchestra, the singers, the mechanisms of an opera house. Some were very experienced with music, like Matthew Barney. Others had no way to talk about music. That was an eye opener about other ways to think about music, not based on what you hear or how it sounds. The phenomenon of time and space has a lot in common with any other contemporary art medium. It’s an interesting way to work.

One piece in the show seems like a performance.

It is, but it’s also a composition. For me it’s a score. Electric guitar, electric light, the audience. In the music business, you can give a concert or make a record, but that’s it. My working experimentally is exactly the same situation as Justin Bieber – a different scale, but the same thing. The performance is a way to begin looking at ways to present a musical performance having nothing to do with a concert. It is a concert, and it is a performance, but it runs seven hours a day. You can come, you can go, stay as long as you want… there’s no stage, there is no separation of audience and performance.

Sometimes combining music and art is like pairing the wrong sides of a magnet: almost coming together, but pushing away again.

It’s funny how cultural ideas develop. It has to do with the separation with music and the body. For years, music and performance were put together; they were exactly the same. With recording, music and body can be separate. It’s one of those interesting things of history, that sets in course a series of “what might have been”. This separation means that, over the years, there’s been more and more focus on sound: its quality, the originality, the exclusion of almost everything else, as if you reduced a painting to only colours, or a film to a series of images. Music is a totality, like sound fetishism. The way things are now, sound has almost pushed away everything else, the body aspect, the performance aspect… the whole world outside the music, the act of composition, organizing time and space, references, symbols. It’s not even a new concept.

One thing that keeps music separated from art is that you can’t hold it in your hand. Is there a commercial aspect to this kind of work?

Yes, it is something valuable. You can buy it. There’s a score, so there’s that aspect. You can also own the performance, you can have the score and instructions to do the performance yourself. I’m the artist, but I don’t have to be involved, even if I’d like to. The economy of it is not so unimportant. The world that I come from, the “new music” scene, has no functioning economy, so the idea for me, is to create a functioning economy.

How is working in the art world compared with the music industry?

It’s important for me to be able to work with different situations, and the music business is not set up for that. A gallery or museum is a better way to interact with an audience.

The art context has been, for me, very liberating. I’m not naive; it comes with its own rules. A huge thing for me, as a musician, or performance artist: the gallery is free. You come see the show and if you hate it, leave, but you didn’t pay 40 bucks. If you love it you can come again.  That’s huge, too, the way work is encountered. It’s important to make the comparison: “How were you doing it before?” with “How you are doing it now?”