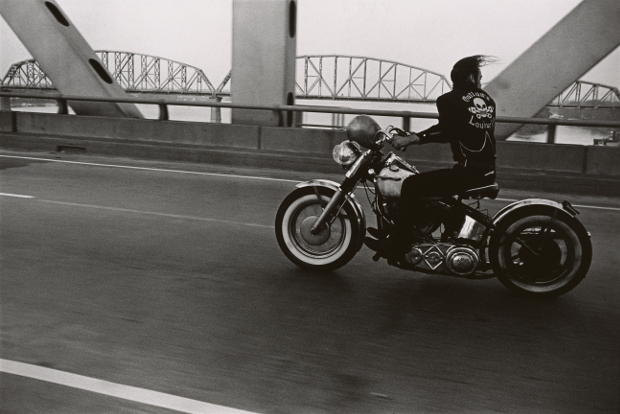 Curator Julian Cox on bringing Message to the Future, a major retrospective on firebrand American photographer Danny Lyon, to C/O.

The exhibition Message to the Future, a major retrospective on firebrand American photographer Danny Lyon, spans over half a century, displaying Lyon’s powerful photos from the American Civil Rights Movement of the 1960s and his iconic images of life inside a Chicago biker gang alongside lesser-known works and materials from his private archive. Cox, chief curator at San Francisco’s de Young Museum and one of only two curators to have ever worked with the mercurial 75-year-old, told us more.

What was the impetus for this exhibition?

The seeds were sown many years ago when I lived in Atlanta and did a big exhibition on the Civil Rights Movement, of which Danny Lyon was a very important part. We formed a relationship and, as a result, I asked him if he would be interested in working with me on a full retrospective.

What is it like to work with Danny Lyon?

If you look at his publishing history, he has controlled the narrative. He has only really ever worked with two curators – Ute Eskildsen, when he was in his early sixties, and now me and my team. So he is one of these people where you have to earn his trust – it has to be the right set of circumstances. He is a very opinionated person, very focused, and we had some challenges – that happens with any interesting artist – but he seems very pleased with how we have been able to present his work to the public.

He’s obviously most known as a photographer, but you’re also showing some of his film works…

We received a generous grant from the Andy Warhol Foundation to restore his films and digitise them. Just last week, they were uploaded to Danny’s website and now the general public can see them colour-corrected in all their vibrancy. As early as 1967, Danny became interested in film as a way to capture prison life that cannot be conveyed in still pictures. Film is not only a medium he inherently loves, but also a way to slow-burn certain projects over many years.

Can you give an example?

What is amazing about the film Willie [1985] is that it has footage that Danny shot of Willie as a 12-year-old boy, when he first met him in New Mexico, and then you see him over time – and in a way, the film is a tragic unfolding of his life. Willie falls into drug addiction, is bipolar, and gets thrown in and out of jail for minor offenses. But he is also a beautiful character and it comes across in the film. It’s the same with the tattoo artist [Bill Sanders] in Soc. Sci. 127 [1969]. He’s a kind of Trumpian idiot, he’s a bigot, but also he says very profound things about the Vietnam War. I think filmmaking allows Danny a different way to present different kinds of personalities. The films magnify his emotional engagement with his subjects.

Why have this travelling exhibition end in Berlin?

It brings the narrative full circle in the sense that one of the catalysts for Danny’s interest in photography and film came from his German Jewish father, a doctor – an eye doctor for Alfred Stieglitz! Ernst Lyon brought these really beautiful photo albums with him to America and made wonderful 8mm films of his family with the kids, Danny and his brother Leonard, in Queens in the winter playing in the snow. So, the fact that we could actually add a vitrine here in Berlin with some of these early materials and bring Danny’s father’s pictures back home to the culture he grew up in is a very deep and meaningful thing.