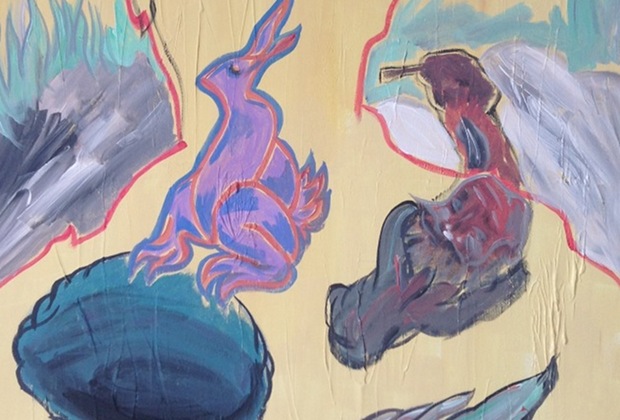 You might know Toby Goodshank’s name better from other fields – the Brooklynite’s first claim to fame was as guitarist to anti-folk quirksters The Moldy Peaches. However, he forms part of the 3MB art collective Macaulay Culkin and Adam Green, has been quietly arting away in Berlin since last October. This is his first solo show in the city.

First impressions are vibrant to the point of grating. A dozen large acrylics fill Bootbau’s pleasantly unassuming space with insistent colour and panic, their cartoonish surrealism seeming showy, even insubstantial.

But stay a little while and you may find it grows on you – there’s something compelling about Goodshank’s nightmare motifs, conveyed with brushwork varying from the broad and slapdash to the meticulously detailed. Buildings wander about on the backs of monster snails or on their own two sneakered feet. Malevolent rainbows blaze from unexpected corners.

Music is front and centre both in the pieces (count the pianos) and even the exhibition style – the opening show, thronged with a keen and 95 percent expat crowd, saw performances by cheerful ukulele-toter Susie Asado and the artist himself.

Film iconography suffuses the exhibition – Peter Lorre’s tense face from the exhibition’s namesake M, Nosferatu lurking in a hilarious H&M campaign. This imagery might be the strongest link to Germany and Berlin itself, other than the pervading sense of hysterical gloom laced with comedy – a feeling any overwhelmed expat may well recognize.