Artist and self-designated preserver of queer culture Dean Sameshima on why his show 647(a) serves both as nostalgia and a cautionary tale.

It’s a familiar story: LA artist Dean Sameshima came to Berlin for a month in 2007 and never left. Ten years later and seven years sober, he works part-time for cleaning company Book a Tiger, and has been making art again after a long creative dry spell. Drawing from an extensive archive of zines, porn, and ephemera collected from years on the LA gay scene, Sameshima’s detailed large-scale paintings depict bathhouse membership cards, receipts from cruising venues and book covers from gay and lesbian exhibitions. We spoke to the artist about what these notes from the underground have to say in 2017.

I had been struggling to make art again. I’d been working with silkscreen and photography to document things in my archive, but photography started to bore me because I thought there was nothing left to document. Then I started painting. I was thinking about how Warhol went from hand-painting images that looked like silkscreens to more mechanical reproduction, and how I wanted to go back to the handmade.

What are you trying to achieve?

These are items that are disposable or meant to be hidden. They’re in some way shameful – you use them for a little bit and then dispose of them, hide them. My approach was all about saving, collecting, representing and preserving those forgotten histories. My first big love was documentary photography, and to me that’s what these paintings function as: a window into what I’m interested in and what I’m obsessed about. Bringing them to a gallery gives them an exposure that wasn’t there before, or has been there but has been forgotten, neglected, pushed under the rug and denied visibility. 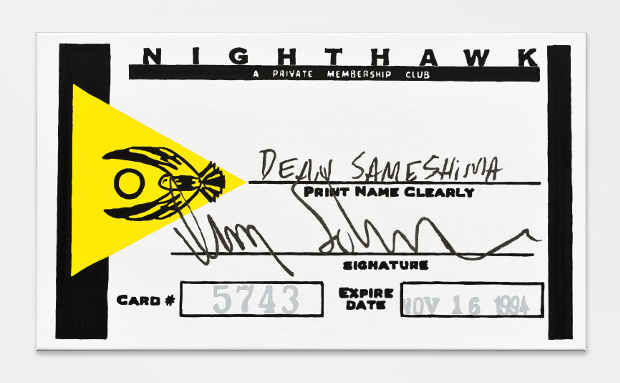 Lewd conduct! A lot of what I’ve participated in is considered lewd conduct. One of the main pieces in my last show was five pages of an arrest record when I got arrested for public sex. The first time my parents knew about it was at the exhibition! [Laughs] I was ashamed, but these days it’s completely outdated. Like, I cruise here all the time in Berlin. No one cares. There are bigger issues. But if nothing else, this stupid election in the States has given me new energy to make the work. I think a lot of young gay people take things for granted. This is what happens when everyone’s so comfortable. That’s when this right-wing stuff happens.

What do you want your work to say to them?

Pay attention. Do your research. Know your history. Because Trump is happening! The younger generation of gays has been complacent, and conservatism in the gay community has been growing for decades. There’s been this wave of wanting to get away from things like cruising, public sex, tea rooms, bathhouses, things that made the gay community interesting and special to me. It’s been distanced like “those are the perverts, but we’re not the perverts”. There’s this kind of heterosexual ideal that has taken over.

Do you see that changing?

When I went to school, people were still doing activist work. ACT UP and Queer Nation were around. There were reasons for queer people to make work. I think once that died down, there were a lot fewer queer artists because I think the urgency wasn’t there to take out their frustrations, to make political work against the government. I don’t know, but maybe it’s going to go back to that. Maybe there’s going to be more identity art coming out because now there’s real urgency again.