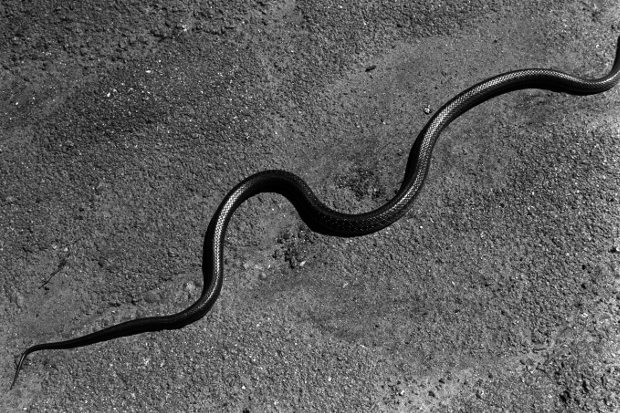 Does the loss of a loved one ever loosen its grip on a person? By placing a photograph of his sleeping infant son amid the other photographs in the exhibition, including ones shot inside defunct concentration camps, Seiichi Furuya’s answer is a brazen no.

Gravitation at Thomas Fischer Gallery presents a selection of the artist’s photographs made from the late 1970s to the 1990s, curated as a sort of memoir. Each picture is named only by year and location. None of the photos were staged, and there were no retakes. The mostly black and dark grey images form a trail for viewers to follow along the white walls of the space. Even though they offer no coherent narrative, a journey builds from Furuya’s collection of refections tethered to the 1985 suicide of his mentally ill wife.

The artist’s mourning follows him into the future, but also colours his recollection of the past. Death is found in the most mundane places – in storage containers, cleaning facilities and orchards. After moving to Graz from Vienna in 1978 the artist snapped a shot of apples being shaken loose from their tree, capturing them before they hit the ground. In 1983 he created a bleak image of serene young animals, floating dead in vats of preservatives. In 1986, Furuya visited Sachsenhausen concentration camp and took an image of a drain in a tiled floor, which reflects the hibernating trees outside. In 1988 Furuya captured a snake slithering across the scorched earth ominously (photo).

Furuya moved to East Berlin in 1985 because of his work as an interpreter and documented his experiences through the unique perspective of an outsider, with more mobility and freedom. One image from 1987 depicts a trapeze artist dangling with flexed muscles, limbs all out of alignment, calling attention not only to the performativity of circus acts but also to the act of being a spectator. This is echoed in a photo taken in Donaustauf in 1988 where a string of viewers stand in front of a line of busts in an art gallery, interest fading as the line continues, the least interested of which fades into the shadows of the room. You can’t help but project yourself onto the viewers in the photograph, made all the easier by the reflective panes of protective glass mirroring your face back to you.

Gravitation is laden with despair for which there is no remedy. The artist experienced many losses, including his first home when he left Japan in 1973. But what his work makes clear is that nothing can prepare a person for the loss of their partner. The looming anxiety in Furuya’s photographs may captivate you, but it also compels you to confront inevitable loss. The light at the end of the tunnel though, at least for viewers, is a renewed appreciation of what you still have.