Four ambitious exhibitions are here to break up the onslaught of Christmas markets and holiday parties this month. Legendary figures, all from different geographies and generations, are having solos in Berlin’s major art venues that define or debunk the idea of truth. What better theme could be found at the end of a year Oxford Dictionaries has declared is best summed up by the word post-truth?

Omer Fast: Talking is Not Always the Solution

After taking his films to documenta, the Venice Biennale, the Berlinale and even into movie theatres, the Israeli-born, American-raised and Berlin-based artist is now having his first major solo in Germany. The show’s facetious title gives away the sense of doubt built into Fast’s cinematic artworks, which call-out the shaping of information through storytelling and media manipulation, and the very notion of truth in an often non-narrative fashion. For Martin-Gropius-Bau he’s taken it a step further – rather than show the seven featured films in a conventional, all-blacked-out presentation, he’s blurred reality again by installing several “waiting rooms”, an idea that struck him while waiting one day at the Ausländerbehörde. One moment you might be watching his newest film August, on the German photographer August Sander, filmed in 3D, and after a stroll into the next room you find yourself in an international airport terminal – every detail, from the departing flights screen to trash on the floor, is there to jolt your sense of where you are. The show fittingly inaugurates Berliner Festspiele’s new three-year programme “Immersion” which will celebrate new, all-consuming installation artists working in the digital age. 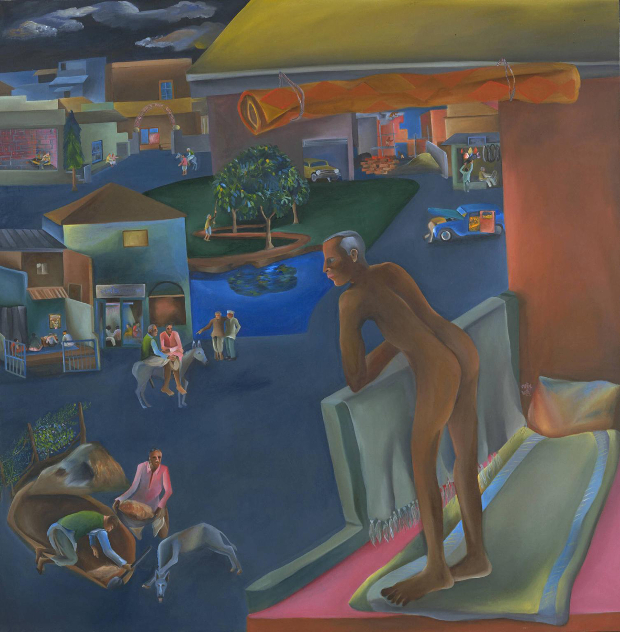 Bhupen Khakhar: You Can’t Please All

Credited as a leading Indian-born modernist painter, Bhupen Khakhar’s work captives with vibrant colours, whimsical figures, and sensitive portrayals of life in India spanning the latter half of the 20th century. Khakhar, who studied art criticism and kept himself informed about artists in the West, pulled from his wealth of knowledge to create complex portraits of his society. But the Deutsche Bank Kunsthalle retrospective, which spans 50 years of his production, provides a chance to experience the artist’s own nuanced, aesthetic mapping of his personal struggles with sexuality and mortality. The 1981 piece that gives the show its title is regarded as Khakhar’s coming out – a lone nude man stands on his balcony as his neighbours go about their daily lives below. In the last five years of the artist’s life he battled cancer, and gruelling scenes of treatments act almost as visceral diary entries. Amongst all of the paintings, and rare accordion books and ceramics, his life feels there for the taking, raw and imperfect. This is the first broad exhibition of Khakhar’s work since his death in 2003, thanks to a collaboration focusing on art from Africa and Asia between Deutsche Bank and the Tate Modern aimed at correcting the exclusionary tradition of art history.

Photographs have always been understood as enablers of information, and Candida Höfer, one of Germany’s most successful artists today, has been using the medium for decades to capture patterns of our visual world. Her story began, along with to the likes of Gursky, Ruff and Struth, in the classroom of Bernd and Hilla Becher, the incredibly influential photographers who merged neutrality to composition, meticulously archiving Germany’s post-war architecture. And while Höfer surpassed her professors in art world success, she carries on their typological torch, famously photographing zoos, theaters and libraries in uniform perspective. For her n.b.k. solo, late 1970s images of Turkish migrant workers in Germany will represent her early works, while two new series “Memories 2016” and “Berlin 2016” defy the uniform presentation of her past, focusing on the almost forgettable details of our everyday surroundings. Regardless of Höfer’s approach, her lens tends to align otherwise sordid pieces of our visual world, and in light of recent events, will likely provide a viewers some much needed catharsis. 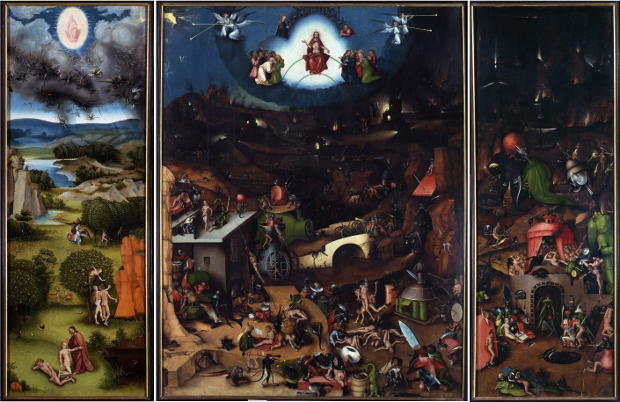 This art legend of the Netherlands, admired both during his time and around the world to this day, is being celebrated by the Gemäldegalerie on the 500th anniversary of his death. But don’t let the big name and big venue deceive you – the show features just one original painting by Bosch, “St. John on Patmos”, and a rotation of two drawings at a time (changing every few weeks). But for Bosch, who only ever made an estimated 16 triptychs and only ever signed seven of them, I suppose this will have to do. To compensate, on view are a number of pristine copies, made during his lifetime by his contemporaries – which in hindsight was the 16th century equivalent of going viral. Through German-born Lucas Cranach the Elder’s “Last Judgement” (photo) and an uncredited “The Garden of Earthly Delights” offer close enough encounters with Bosch’s brilliant labyrinths of good and evil, humans and monsters, and fantastical structures almost space-like to the contemporary eye. While the true aim of Bosch is not exactly known, it’s theorised that he wanted to visualise the important moral tales of the day, and help others reflect on the inner truth of mankind and the world. Standing face to face with his mad depictions of tumultuous times at the end of 2016, it all makes perfect sense.