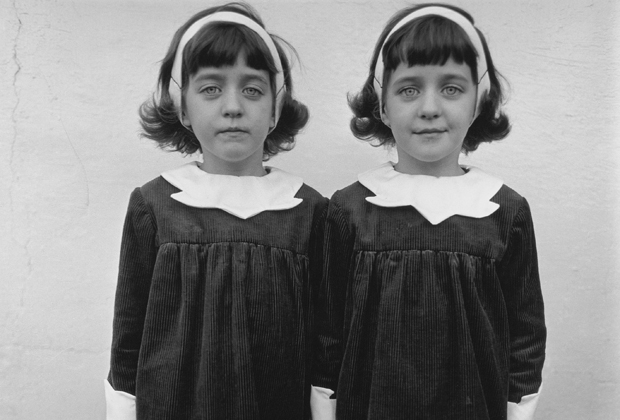 In her seminal On Photography (1977), Susan Sontag accuses Diane Arbus’ documentary-style portraits – a John Waters-esque collection of dwarfs, transvestites, nudists, tattooed men and mentally retarded kids – of cruel exploitation. “In photographing dwarfs, you don’t get majesty and beauty… you get dwarfs.”

Undeniably, these revolutionary portraits play with this quality, empowered by the strangeness and the bold gaze of the ‘freak’ subjects Arbus methodologically sought out. They show her morbid fascination for the ‘other’ and her penchant for taboo-breaking, propelled by her feelings of kinship with those marginalised by 1950s and 1960s society.

Though lessened by progressive social mores, the exoticism and novelty of the pencil-moustached Mexican dwarf in his hotel room, stubbly fingers draping a towel over his torso, still titillates, as does the Jewish giant scraping his head against the Bronx living room of his parents’ house. But there is psychological depth to these portraits that goes beyond exploitation.

Facing one of the 200 black-and-white portraits on show at Martin-Gropius- Bau, the viewer dissolves; reductive labels and prejudice are subsumed by the forceful presence of these complex, nuanced individuals captured in the fierce grainy detail of her lens. More than just a dwarf, he betrays a soft longing, a liquor bottle by his bedside table, and the hotel room portrait tenderly asserts the man’s unique humanity without condescension or romance.

Even more powerful is Arbus’ 1970-1971 series taken in a facility for the mentally disabled as masked residents, both endearingly innocent and repulsive, frolic about a field. The dynamism imbued in these now-iconic images mark Arbus as one of America’s most distinctive voices in 20th-century photography.

Born as the rebellious black sheep in an upper-middle-class Jewish family in New York, Arbus fell into photography via her husband, Allan Arbus, with whom she pursued professional fashion photography. After a lifelong battle with depression, she committed suicide in 1971 at the age of 48. (For Diane die-hards, the exhibition dedicates a final room to biographical material, more rewarding than Fur: An Imaginary Portrait of Diane Arbus, though the film is worth enduring just for the scene with Nicole Kidman as Arbus kinkily shaving down a werewolf syndrome-afflicted Robert Downey Jr.)

While scouring Central Park and Washington Square in the 1950s for subjects a world away from fashion’s mainstream, Arbus also documented ordinary citizens and a slice of time in New York: pre-punk youth sporting clean-cut slacks, wandering-eyed young couples, dolled-up oldies and wartime protestors and patriots, with any background restricted to symbolic objects like a muscle man’s trophy.

Her personal work avoided street-style spontaneity for these staged collaborations, maintaining a Walker Evans-inspired deference to the subject in which Arbus herself powerfully disappears, despite the intensive nature of the relationships (often years-long) between subject and artist. Arbus’ portraits – the subject standing at the centre of the frame and carrying the full brunt of the image’s focus – often betray a façade undone. In Arbus’ own words: “Everybody has this thing where they need to look one way but they come out looking another way and that’s what people observe.”

Interspersed with Arbus’ freaks, and with every wrinkle, pore and layer of foundation on show, seemingly ordinary subjects like society ladies become just as strange and artificially composed, if not more so. At the same time, the hand-holding, middle-aged couples of the nudist camps exude the retrospective’s strongest sense of calm self-acceptance, posing questions – provocative at the time, embraced hyper-ironically now – about the weirdo hiding in us all.