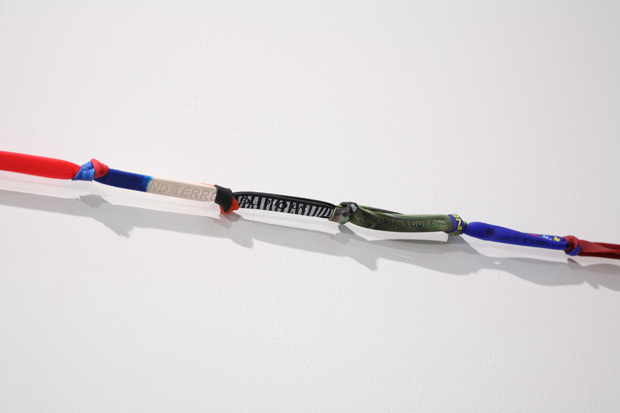 Newly opened Kraupa-Tuskany gallery has already staked out its place in the Berlin art environs, having lined up a series of shows by artists fascinated by technology and digital aesthetics.

In Sociodelic Paths, which ended last month, the emerging gallery offered the rare opportunity to see works by Sture Johannesson, a Swedish artist who has been heavily censored and denied the opportunity to exhibit for many years – the artist also appeared in the Transmediale exhibition this month.

Johannesson’s lurid poster collages from the 1960s combine a psychedelic explosion of colours and shapes with pop iconography and political commentary, influenced by the artist’s anti-authoritarian stance, which was fueled by his own experience growing up in a eugenics-obsessed orphanage.

In addition to installation and sculpture, the duo exhibit paintings made with carbon black and titanium dioxide, binary opposites on the light spectrum.

The exhibition casts a satirical and cerebral commentary on paranoia, the futility of risk management and technological solutions in a culture obsessed with sustainability, value and convenience.