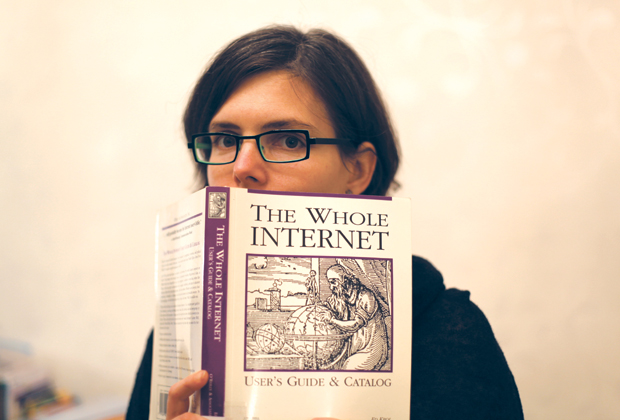 Influential digital artist Olia Lialina on this year’s Transmediale and why the internet is not a “neutral object machine”.

Pioneering Moscow-born artist Olia Lialina is well know for her contributions to the net.art landscape of the late 1990s. Her iconic piece My Boyfriend Came Back From The War is a hyperlink narrative that, in a time of little blue bars and dial-up LANs, took about 15 minutes to click through in a choose-your-own adventure-style online format that highlighted the experience of navigating the web.

Subsequently opening up the source code to encourage remixes, Lialina has been at the forefront of cultural negotiations about the preservation of digital artworks.

For this year’s Transmediale she will participate in the ‘in/compatible’ symposium program, cryptically titled “Unstable & Vernacular: Vulgar & Trivial Articulations of Networked Communication.”

What’s your contribution to the symposium?

I am part of “In/compatible Aesthetics”. At the panel discussion I’m going to talk about such things as digital vernacular and digital folklore: aesthetics and elements that you can find online that don’t come from design and developers but are based on the activity of users and the language that web users have developed in the last 15 years. These aesthetics are often seen as a ‘low’ digital culture.

So you will be discussing specifically the aesthetic vernacular – visual languages? It’s very much about the aesthetics of representation on the web?

Yes. This is the way users express themselves. This is important when they are very clean environments, and that interests me most, and what I am writing about and making are artworks that bring this quite neglected aesthetics to the foreground.

What for you at the moment is ‘uneasy’ about our cultural engagement with the internet?

One concern is that it begins very, very comfortably. It begins as a mass medium of the users, and it’s not a new medium anymore. It’s comfortable, convenient. It’s also so easy to make art online because of the tools and the mash-ups – there is a framework for everything, also for making art – so everything is convenient. And of course, everything that’s going on with censorship…

In terms of what’s being made on the internet at the moment, what artists are you interested in?

I really love what Johannes Osterhoff does – he is also part of Transmediale – his Google performance where he made his search requests public. That discomfort means to adjust your life to constant surveillance. It’s about being completely open about everything, and now there is a really interesting range in documentation of what he went through in this time.

What interests you about Transmediale specifically as a festival?

I am looking forward to the exhibition and meeting the new team. It looks like it is really a generation change: finally people who are younger than I are making this – younger, but interested in the same thing. It makes me happy.

You are credited with being a net.art pioneer. What do you think remains of those original concerns?

What continues is the attention to the network, to the internet – that it’s seen by the people, by the artists, and that with their work they are attracting attention to its existence.

The efforts of the industry, of designers, of developers – of everybody who is working online non-artistically – are to make the internet disappear. What artists are doing is showing it in many different forms. It can be a critical project; it can be misusing the website, the server, the network; it can also be glitch art, where you can show what went wrong.

The point is to attract attention to the medium, so that it’s not transparent, so people acknowledge it, and this is a tradition from that time – from the mid-1990s.

How do you envision the future of art-making on the internet?

I think it will be not making work online – the value of the works will be to show the network: the beauty of the network, the dangers, everything, the use and abuse of the network.

What do you think those dangers are?

The danger that you don’t understand how things work – that you are fooled.

So using something without knowing its full potential?

China Channel, from F.A.T. Lab (fffff.at), is a project that shows one computer and one keyboard, but two screens, and you search on Google, and then on one screen you see the internet how it is usually here, and the other looks through the proxy server in Hong Kong and shows you the internet in China. A very simple work, but it shows you that it’s not you who decides what you see – something that attracts your attention to the fact that it is not a neutral object machine.