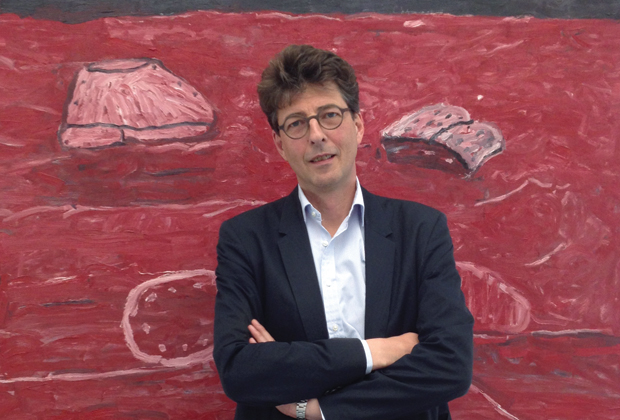 Amidst the current Berlin hype of ‘post-painting’ and ‘young art’, gallerist Aurel Scheibler re-references the foundation of modern painting through the work of Phillip Guston.

As a painter and graphist in the 1950s New York School (also known as the Abstract Expressionist movement), Guston has had a major influence on most of the world’s painting for at least 70 years, acting as a reference point for painters young and old and resurfacing when the art world has needed it – for instance, at the end of the 1960s, to counteract the Pop Art and conceptual movements of the decade.

Now, Scheibler presents a very concise show of Guston’s later works in his Berlin space, not to mention fostering a larger retrospective show of the artist’s works in the Deichtorhallen in Hamburg.

How did working with Guston come about?

I followed Guston’s work when I lived in New York in the early 1980s. It was clear he was someone to watch, at least to me. Ten years ago, I wanted to do a show and I started talking to [Guston’s NYC gallerist] David McKee. He said Germany was a difficult country for Guston – the museums and collectors were not really interested. But I kept coming back to him. Then I moved the gallery to Berlin, a place where you can show things that haven’t been seen here.

Living in Cologne, you’ve got so much information on art and artists through the art fests, through the museum shows, through the galleries. Berlin never had that chance. So I tried to do more historical shows, which I’d started in Cologne.

First, I had a small space in Charlottenburg where I could do really concentrated shows. At some point with Guston, I knew where things were in Europe and I borrowed four paintings, got lithographs on consignment. It was a pretty fabulous show, just focusing on the late work.

What’s the connection between this show and the one at the Deichtorhallen in Hamburg?

About two and a half years ago, they were planning a Berlin show at the Martin-Gropius-Bau. The idea was sort of dropped at the last minute and then the Falkenberg [art collection] took it over in Hamburg. So then I said to McKee, “Why don’t we do something in Berlin?” and he said, “I’ll help this time!”

We looked for available pieces and worked on this for a year and a half or so. Then all of a sudden I had a wonderful, full show. I was worried that I would get sort of leftovers from other shows or things that didn’t sell, but I really did get very good examples, some very exceptional drawings. I also got two works from 1960 and 1961 that really informed the late work. It’s abstract and not abstract; it doesn’t really matter. You can look at the painting and the imagery enhances it and gives it a further dimension which I think is very, very unique.

Is Guston known in Berlin?

There are a lot of people who don’t know him. Even the informed people in Germany just know the late work. And then they’re surprised to see these two earlier paintings from the 1960s on the wall. I’ve even had people asking me, “Are these later than the other paintings?” But a lot of young Berlin painters are coming and looking at the work and saying they love Guston, he’s so important and so amazing and so on.

I think it’s great, even though he still is unknown to the larger public. That’s what interests me. The works cost a lot of money. In America, he is one of the top five, six, seven, whatever painters, but still not here, so that’s my sort of inclination to do something and to try to change that.

I know what you mean. I don’t know. I don’t actually care. I’ve always showed older artists like Joe Zucker or Alice Neel, people who don’t have the exposure. I especially like showing these artists in a surrounding where the focus is really on contemporary artists and a lot of sort of blah blah blah.

There’s this pressure to focus on artists from 30 to 35.

In my opinion, painting generally only starts to be really good when the artist is in his or her forties. Or 50 even. Take Wolfgang Betke. People really like his work, and then they say, “How old is he?” And they’re like, “Hmm.” I mean, if I were to say he’s 28, he’d be all over the place. It’s too much. I do think it will switch back at some point. I mean, we’ve had this sort of youth culture thing for a while now.

And everything’s taken this very sort of conceptual art direction. But I feel at home here with these paintings.

Yeah, you don’t need much explanation. I mean, it’s good to know a lot about him and how he changed his style and what he went through without making any compromises and so on. He’s an example to a lot of younger artists. I like that. To not be compromised. Do what you want to do and stick to it.

It’s amazing how he sort of twists between being very earnest and also quite humorous, and you can see that in the drawings. In a few little lines it’s changing from something that’s very serious to something that’s very funny. It’s a trick; it makes it easier to deal with actually. A lot of very good artists have a twist of humour, and if it’s done well it’s very intelligent.