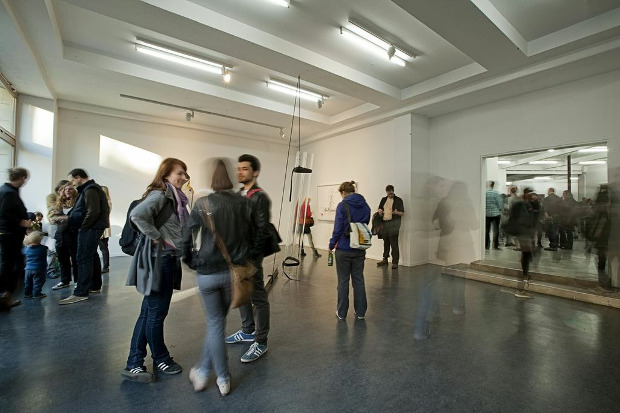 In Berlin.Status[2], on view through June 16, curators Christoph Tannert and Sven Drühl aim to somehow map out the ever-growing Berlin art scene but got scorned.

After reading searing, yet rather superficial reviews from other Berlin art journalists, Fridey Mickel decided to go to the source, having a conversation with Tannert about the exhibition and the state of the Berlin art Landscape.

Your exhibition has caught some heat from the press…

Of course the journalists can state the questions which they wish to ask. Naturally, when one nominates 100 artists from, say, 6000 in Berlin, it can be seen to be quite subjective, but I believe that our selection is not so subjective as the press believes. We took quite some time – over 18 months – to research and consider many positions, which already had the acceptance of other curators from galleries, museums and other institutions. I believe that when one looks back at these positions a few years later, many will still be relative.

Should an exhibition about the status of Berlin have to say “Berlin is great”?

The exhibition doesn’t say that. The exhibition gives no ultimate answer about Berlin, but rather it offers a fanning of subjunctive artistic approach in Berlin, and shows that there is no “Berlin Style” in regards to art. Rather, there is a great diversity in artistic approach. The development here in the 1980s and 1990s, when one could clearly say‚ “This is a group of artists who are doing something new…”, these time are long over. We are swimming in a very wide current of many different groups of artists, who otherwise would have nothing to do with each other. All in all, Berlin has developed into a cluster, and the art scene here can no longer be described in a linear way.

There is no real “Berlin School”.

Yes. The artists have different educations; they come from different art schools, with different mentalities. Some see Berlin as some sort of ‘generator’, while the others address their projects directly on Berlin, like Larissa Fassler.

Somehow, the press still could only say “It was total shit” and then just blandly describe a few random artworks…

Yes, exactly. It’s just terrible that the journalists just randomly think things out. That they don’t compare, that they don’t discuss with the artists or even with the curators. Rather, they think something up and then write. There is no dialogue, no true art critique happening in a field of discussion. That’s why they are all just art reports, ultimately uninteresting. But if the journalists had truly ‘been’ here at the opening, and had seen how great the acceptance was, how much interest for this project there is in the art scene, also the competition between the positions, then they would have seen how important this project is.

I am happy that Zitty wrote, “Hey, it’s really good! They should do an exhibition every year!” but that would also be bullshit, because it’s not about doing some kind of big Berlin exhibition every year. Rather, we wish to form a scale with this show and then wait 10 or 12 years. Then we make an exhibition where one can compare. Yes, here it’s about comparing, it is about debate, it’s about a myriad of ideas. For us, it was about showing fresh and qualitative discourse shown through interesting positions. From artists who are, in part well known, and others who are unknown.

Away from the clamour of the opening, it’s easier to see how the show functions as a whole.

We designed the show using aesthetical, qualitative criteria, for instance, “Where are similar materialities?”, “Where could one start a dialogue?”. That’s why the characters of the different space segments vary so much.

It can be dangerous to be a curator…

Artists have another perception, or one doesn’t get to use the work that one would like to show, or the artists just say no. We received a lot of declines, because certain artists said “Group exhibitions are the death of artists. We don’t want to participate out of principle.” I can understand this, but this also limits our aspirations.

But are you still able to stay objective in showing the Berlin art landscape?

Naturally. Of course. We continue, but when you think about it, you have to follow it. Yes? It can have no absolute size. We are not God. It is relative. You know, we could correlate Moritz Schleime with Despina Stokou, because this Berlin filth also comes out there. If one was to form some kind of Berliner painting tradition, then Schleime and Stokou are both on a level that one can trace back to 1980s punk and new wave.

In an exhibition dealing with the Berlin art landscape, can you reach a balance between quality of art and a showcase of important people and aspects of the scene?

Every curatorial statement is a claim, and I have the responsibility to prove this claim with art and artistic positions. But this is all relative. We don’t have the time to wait 20 years in order to objectify the scale. We organised this exhibition because we wanted to introduce current positions directly from contemporary time. It has mostly to do with catching the zeitgeist, this spirit from these years. It has more to do with mapping a scene than with presenting the best art of all time. It is an experiment, an open process, and Künstlerhaus Bethanien is known to be a workshop. That’s our difference from commercial galleries and museums. But I think spaces like Bethanien need to exist, too.