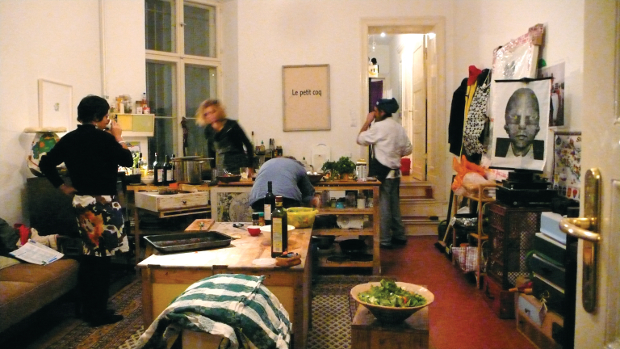 Fridey Mickel looks into what happens when galleries meet gastronomy.

Food and art. In many ways, they’re the same. They’re both important elements of any culture, and some might argue they’re both basic needs. The idea of combining the two is hardly new, as anyone who’s seen Warhol’s cans of soup or Ferran Adria’s modernist dishes can attest. But Berlin is now home to a growing subculture of spaces incorporating art and food. We spoke to two such spaces and two artists about how the various concepts came together and whether it is a professional platform for artistic dialogue.

“People can meet and discuss art and food outside the usual commercial settings, so the creativity of each is free to come out,” says Malte Zacharias from Gartenstudio on Naunystraße. Hannes Gruber, who runs Kantine (the actual former cafeteria in the Aqua Careé) reports that their idea of incorporating food and art came out of the fact that many artists had their studios in the former factory. Both organisers agree that incorporating food and art enables a space to function more as a communication centre, making the visitors feel more comfortable, using the element of food and eating to neutralise the dialogue about the art.

Tom Fellner, an American artist living in Switzerland, came to Berlin in 2008 for an exhibition at Zagreus Projekt, another well-known food-and-art venue on Brunnenstraße in Mitte. “It was an interesting idea,” Fellner says. “I first met Uli Kraus [from the Zagreus Projekt] through a mutual friend. My first proposal was to do a Mexican ‘Feast of the Dead’, which he nixed. Eventually I proposed ‘Cuisine Macabre’. Uli made a macabre menu to go with the show – the opening was rabbit including its head, on a bed of lettuce and flowers. I got together with Kerstin Junge, a theatre set designer, and we created a coffin-like interior with a series of dance-macabre drawings.”

Stefano Minzi, an Italian artist living in Berlin and a frequent participant in Gartenstudio events, says, “The Gartenstudio approach fascinated me right from the start. I deeply believe that cooking with love and passion is a form of art. In my opinion it can be considered superior to fine art.” The difference, he believes, lies in the way we consume and react to food and art. “A well-cooked meal is always enjoyed fresh, immediately arousing the sincere reaction of the public. It is extremely rare for someone to compliment a badly cooked meal. On the other hand, it is very common that people praise a work of art that is bad or weak.”

Additionally, bringing art into a more public, non-gallery arena enables it to be more accessible. “We wanted to show art in the Kantine because there are actually 50 to 100 people coming to the place every day,” says Gruber. “These are almost museum numbers. Maybe here the pressure is lower, because you also look at it on the side, not on purpose.”

But is that really the way art should be viewed? Many artists believe that showing their artwork in a venue that serves food could be seen as unprofessional, the art merely an accessory to the public’s dining experience. Kantine and Gartenstudio address this topic, taking careful actions to make sure the food does not grab too much of the attention.

“It works sometimes, sometimes not,” says Gruber. “As artists ourselves, we see our work as dedicating ourselves fully to the cause. In this case, it is to focus on the successful preparation of the food, while stimulating the mood of the guests.” Tom Fellner feels confident that his artistic position was properly addressed, although he admits that at a certain point the food was more the focus. He goes on to recommend Zagreus Projekt as a “cool experience”.

Stefano Minzi addresses this topic by saying “The projects I’ve collaborated on have always been performances, not direct exhibitions of my paintings or drawings. I found myself cooking with other people in different contexts and locations. Honestly, I never worried about my artistic position in these contexts. The communal nature of cooking and eating, Minzi says, makes the Gartenstudio “a good place for cooperating artists to try out a new format. It is a meeting point between art and community.” He goes on to say that the key to understanding venues such as Gartenstudio is to “descend from the pedestal of the artist and get together with other people to do things with your own hands”.