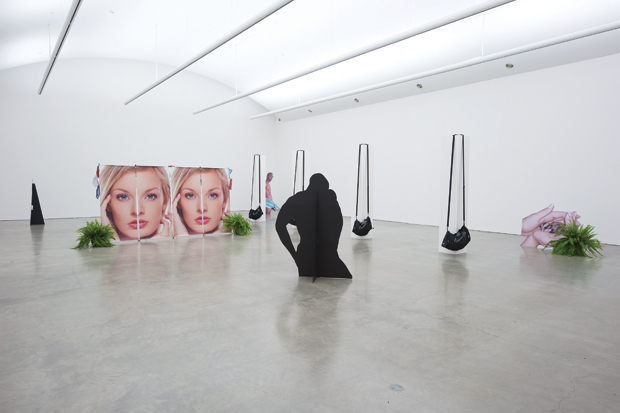 There is Darwinian logic to shapes and colours, says Katja Novitskova: some are succesful in our built environment, others are not. For her solo show at Kraupa-Tuskany, she is presenting a sculptural assemblage combining the materials of advertising display technologies with ancient printmaking on vellum and papyrus.

Known for her self-published Post-internet Survival Guide, a response to the ‘post-internet’ art phenomenon, Katja Novitskova has been working for several years within a cohort of artists and thinkers centred in discussions around the internet and its place in the world. Reflecting new Materialist philosophy, her sculptural forms use imagery and motifs from the natural world to create a comparison to the way humans have now chosen to ensconce themselves within design and aesthetics.

What is your upcoming show influenced by?

The grand topic is the birth and evolution of worms, and the evolution of forms in relation to their materiality, how certain shapes and things want to be perceived as beautiful and prevail as cultural and visual memes, and what kind of materials express them, from reformed papyrus to reformed oil that makes all these plastic advertisement displays.

Could you explain how you usually assemble the objects and select them?

You can call it this fancy word ‘assemblage’, where you take certain elements from pre-existing environments, either online images or commercially produced products, and you combine them in a way that creates new entities, almost like new life forms. For the work Apical Dominance I made a series of little trees from two elements. For me the interesting thing is, what kind of formal properties makes them recognisable as trees? I found that there’s this thing called apical dominance, where every tree is defined by this property, and whatever material is using the same property becomes a tree. I also Googled images of moss and trees and then printed this digitally on folded textile and I wrapped it around weight stands as the opposite gesture of a weight, like added naturalness. I thought that’s funny, to take something very synthetic and produce something that is almost recognisable in nature, especially in the context of the gallery.

How did you become interested in evolution and the natural, and how that’s manifested in contemporary commercial culture?

Post-internet Survival Guide looked at the trends and popular shapes among young artists and the internet that particular year and the things people have been using, like the Ipad and Iphone. I looked at it in relation to the narrative in human evolution – like from when we were half-monkeys till now – basically, how this evolution is driven by what is trending and what is cool. With each new project I go back in history, to the basics. I’m looking into how advertisement is related to nature and evolutionary technology and getting into the root of the problem. If you think about success and trends in forms, it automatically brings you to these timespans of evolution where certain shapes get developed, like why humans have a preference for symmetry and how symmetry is used in imagery. Also how silkworms are taking shape and how they are reappropriated all over again in all kinds of scenarios especially in art and advertising and social networking…

You did a show recently with Berlin-based artist Timur Si Qin at Bard recently – he’s also interested in evolution and materialist philosophy. You used images of an African American male in that show. Why?

There are at least two images of African American guys that I found via Tumblr. I follow several hundred different Tumblr blogs. Some of them are these American black gay youth kind of blogs, a very particular subculture. The images I use are just from seeing them in my Tumblr feed, because they’re super beautiful. It was not really a comment on blackness or being American or making history, but I knew it was going to be read in this particular way. The purpose was to use pictures of a beautiful man more than anything. I couldn’t really analyse it more because I’m an Eastern European woman and an outsider, but one of the comments was that I can use these images ‘cause I’m an insider in the online Tumblr thing, I’m following these things just like anyone else can follow them, and the fact that I’m so different from them doesn’t make it less available for me. These images, they sort of work as perfect attention attractors, so I feel like I have a lot of right to use them, but I wasn’t sure if I had a right to show them.

How does your work most commonly manifest?

Basically making assemblages. I don’t really make things myself. For example, I take an image of a man and a bird and put them together, and then I print them in a commercial service. It’s sort of how the world works these days. Like when a small store opens they order in signs and mugs and T-shirts with a brand, and when I do a show I almost follow the same process. I think it’s really interesting, to be this small-scale business. It’s sort of a comment in itself.

What else inspires you?

You’re positioning your work in an apolitical way, but then drawing from these sources. How does that work?

Well, I’m obsessively watching stuff about politics and economics. Because I watch it so much, I don’t want to take a stand. There’s always something that I learn that I didn’t know before, so I don’t want to make work that has certain judgements or ideological assumptions. Like I’ve been trying to figure out what’s going on in Syria, and I watch like 10 different channels, with 10 different ideological positions – Al-Jazeera, CNN and some Russian stuff – and they all say different things. I would never be able to make a work about Syria because I can’t allow myself to make any statement about it – it could be ridiculously wrong. But I do believe I can make statements about art and nature.

Does that have something to do with the information age?

You get so many sources of information to draw from that you’re unwilling to pick just one? Well, I can’t rely on one, that’s for sure. It’s very interesting to surf what’s going on but I think there’s a fundamental lack of transparency for the information. There’s an illusion that we have a lot of information, but it’s actually very limited.