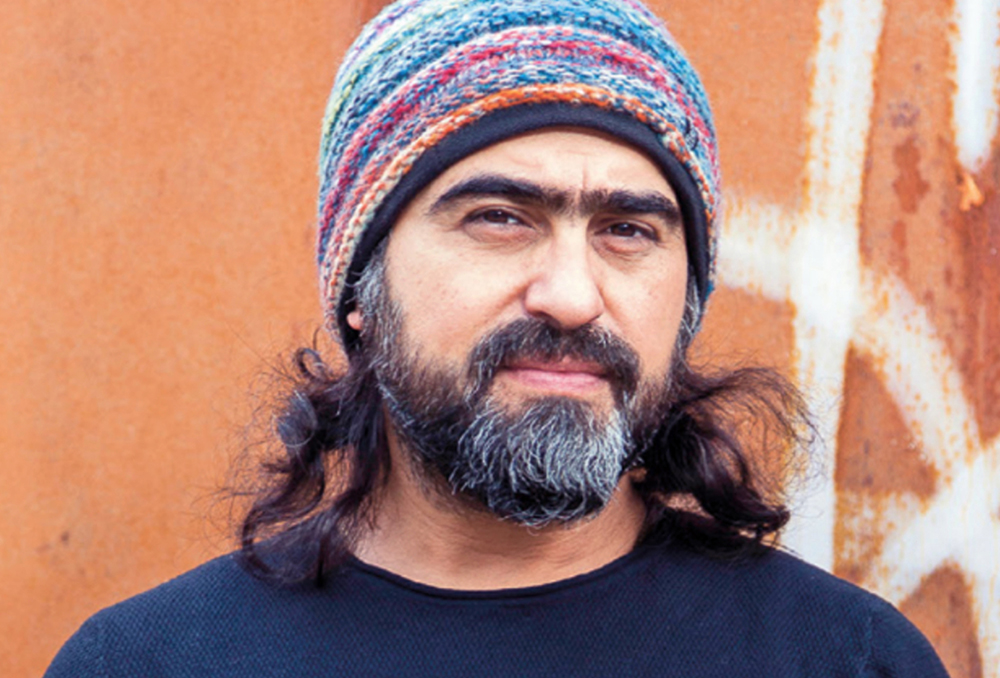 Filmmaker and photographer Ammar al-Beik grew up in Damascus playing junior professional football, ditching his studies in Business Administration and learning his craft working at a camera repair shop. Exiled from his home country since 2011, he has shown his work at the Venice and Berlin film festivals and, opened last month, his first German exhibition featuring film, installation and painting spanning his work from 1996 to a new feature-length film.

How did you begin making films?

In Damascus in 1995, next to my mother’s house there was this fl our mill and every night I would hear the sound of this place. I decided to make a film of the people working there and it was the first time I found myself working with the real people of Syria. Light Harvest was the result of this.

And your latest film Waiting for Socrates – can you tell us something about that?

It’s a feature film about football and philosophy. I love football, it is so important in our time. For many years I dreamt of meeting Diego Maradona. He went to that world cup to fight for the Falkland Islands, and he scored two goals against the English. In his sport he was a revolutionary because he was fighting for something, but on other levels he lost – he is not a real Che Guevara. In my dream we always spoke of revolution and I asked him for his signature but couldn’t find a pen. Then one day a good friend invited me to dinner and there I found Diego. My friend had brought two books published from my exhibitions that both had dedications to my parents, Robert Bresson and Diego Maradona. It was a very nice moment, because he asked me to sign a copy and I asked him to sign one.

Some of your films, such as La Dolce Siria, are directly critical of the Syrian government. Is this an important part of your work?

Yes, over the last eight years we have lost many things: we have lost our freedom, our homes, our memories, our families. Of course if you are not with the Syrian regime, you will lose a lot of chances. I have never screened my films in Syria. In 2011, the people went to the streets because they needed to eat and they needed freedom, this was the peaceful revolution. At the same time I was at the Venice Film Festival and journalists were asking me questions about Syria. I have not been back to Syria since. They would arrest me, like they have my friends. In 2011 I found myself under the spotlight, talking about Syria and I decided from then on to use my platform as a filmmaker and say it clearly: we have a dictator and we need to fight him.

You are mainly described as a photographer and filmmaker but there is a large painting in your Haus am Waldsee show, is this your first painting?

No, from time to time I like to play with paint, it lets me take a rest from filmmaking. It’s not about being a professional painter. There are details in the painting that tell the story of the refugees and I think art should be related to the suffering of the people. There are symbols throughout the painting, and I use the word “extremist” in it. I think all of us sometimes want to be extremist with something: with love, with cleverness, with pain, with everything. And I like to see this word because the news has created a phobia around it.

You include found footage in your work, such as news footage of the Syrian Russian space trip in 1987 with astronaut Major Mohamed Fares exchanging pleasantries from space via video link with President Hafez al-Assad [father of Bashar al-Assad] in La Dolce Siria. Why is this?

I find it is close to the work of Duchamp and that if we look we can find art anywhere. I describe myself as an ‘ex-artist’ in my biography. If I’m not under the word ‘artist’ I can open my mind to philosophy and I can discover and make more art. And when I talk about revolution, it isn’t always about Syria. It is also about how we talk to people, how we love people. Because love is everything. Without love there is nothing.

You came to Berlin in 2014 as a refugee. Have you made any work about this experience?

Yes, when I arrived in Germany I spent eight months in a refugee camp near Spandau and for me it was an amazing eight months. I thought before that I was close to the street, but during this time I found so many stories, I found a lot of friends, and they talked to me and let me film them. I used my camera not just to film them, but to also make them feel okay. And I will make a film with this footage, I will start working on it this year because I have something to say.

One to Free Through May 5 Haus am Waldsee, Zehlendorf