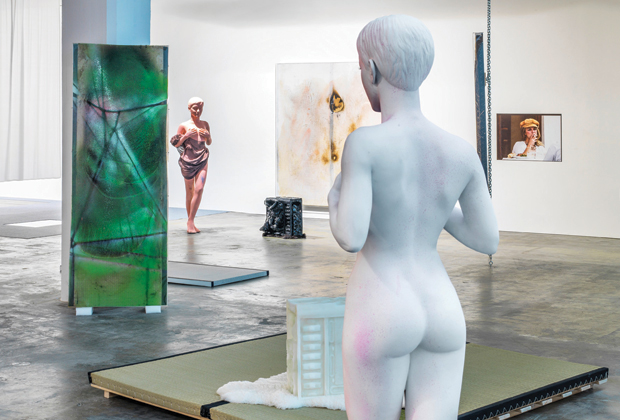 Entering Closer, you feel immediately like you are intruding. The room is cordoned off with silky material; the works are placed irregularly. Everywhere, you see Emma Watson. She’s bronze, white, shrouded in silk or embellished with anime-style eyes. Possibly the most stunning and hardest-to-read version of her stands confined in a shipment container with built-in soundproofing and a cooling fan wrapped with an animal skin. In just as much abundance are arrays of tatami mats, desecrated and sealed in Perspex boxes and hung next to cheap laser prints of unassuming celebs smoking.

The viewer also finds a selection of amateur fan art; low-quality pencil drawings of vaguely familiar manga-esque characters alongside Scherer’s signature Sharkoon T9 computer tower. Scherer’s Emma Watson obsession has earned him some blowback from female art forums, where he’s been criticised as a member of the “nerd art bro generation” on a par with his contemporary Ryder Ripps (accused of exploiting Craigslist sex workers for his piece ART WHORE).

Yet 27-year-old Scherer, a newly graduated artist from the London Royal College of Art, somehow doesn’t sit so comfortably in his new role as “beta-male”.

What drew you to Emma Watson?

I lived in London for the last two years; she’s everybody’s darling there. She has been dubbed the “most flawless woman of the decade” and has grown from a child actor to a grown-up woman in front of all our eyes, which is perhaps why she receives a lot of attention from certain online communities – you could say the internet trolls, nerds, etc. My choice to include her came before her UN speech or her nomination as an ambassador for female rights, and the disrespectful way those online communities responded.

Closer has a digital component – it’s taken over the gallery’s website. Is that an intrinsic piece that has to be viewed with the show?

Yes, the website is very much a work. I am hoping to create the feeling you get after surfing on somebody else’s life or looking at videos and images other people have lived. Only on the webpage can the viewer really experience it firsthand.

What is the largest misconception with your work?

I generally don’t believe in misconceptions; I’m not interested in didactic works. I see the work more as a proposal, I don’t feel that the recent critique from feminist art factions is a misconception of my work – quite the opposite. I’m really interested in this discourse and to get to know the work better and learn about it myself.

What does ‘post-internet’ mean to you?

I believe that post-internet art has been one of the most interesting movements in recent years. It comes without any clear direction or even manifesto really, but exactly focuses on dialogue, creating a rhizomatic structure rather than progress. Living in Berlin for most of my learning years, as an artist, has obviously influenced me a lot.

Is fan art dear to you in some way?

For this show I have come across a plethora of fan art, but I was drawn to fan fiction. I think that in some ways you could see Closer as a work of fan fiction. The same obviously happens with consuming Harry Potter. You can fall in love with Hermione Granger – a feeling that probably won’t be returned.

I was thinking about creating the environment of a fictional charity event where both the Emma figure and Lian Li computer cases are standing in a storm of strobe lights, meant to imitate the flashes of press photographers on the red carpet. The hashtag links are the way male celebrities have showed their support to the HeForShe campaign, so it’s quite the opposite, actually.

Are you an outsider creating observations about the hacking scene, or is this something you have discovered first-hand?

To the hacking scene, I’m definitely an outsider. But the show is about a much broader sort of community or group – spending time in virtual forums such as 4chan rather than spending time with people in real life. Which in some sense includes me, too. This border is especially interesting now that I get called a “loser”, “beta male” or a “retarded person” for some of the work in the show, as in many ways this is the persona the exhibition is meant to reflect on.