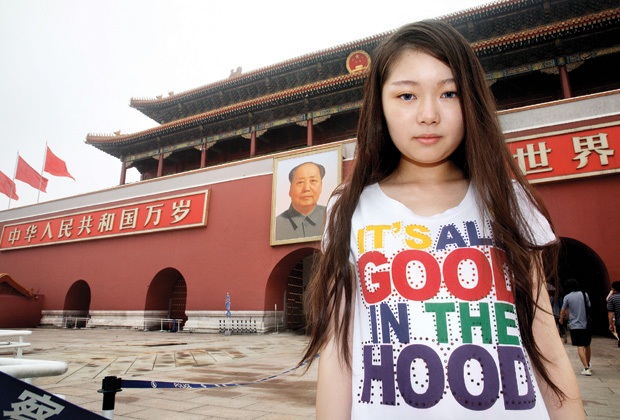 Throwing up the buzzword ‘globalisation’ as a creative starting point, the Guggenheim presents an exhibition featuring heady, contemporary works.

As cross-cultural barriers collapse in the age of Google Translate, nine international artists use photography, video and 35mm film to critically and imaginatively comment upon an ephemeral world always in translation.

Uruguayan-born artist Alejandro Cesarco celebrates the disjunctures and crossovers of multiple languages and cultures, journeying through “Canto 1” from Dante’s 14th-century epic poem Inferno . Lined up side by side, 10 photocopied pages of the same scene from English translations shift with each additional reading. As the text blooms, perpetually transformed and re-envisioned through interpretation, the restless translations float beside Dante’s Italian rhymes, aping an untouchable original.

Equally explored is loss. Like Denglish, cross-cultural appropriation often dislocates text as it sheds context and substance. This phenomenon’s capacity for both humour and terror is explored by Chinese artist O Zhang, in his giant, bright, vinyl-bannered photos of Chinese tweens sporting slogan-emblazoned t-shirts in front of iconic Chinese historical sites. One girl’s shirt says, “IT’S ALL GOOD IN THE HOOD,” while behind her, Mao’s portrait gazes down upon the site of the Tiananmen Square Massacre (photo).

This dual experience of loss and gain is most richly captured in Israeli visual artist Keren Cytter’s cinematic fantasy-noir Something Happened, a seven-minute video that loops the final, fatal scenes of a relationship. Audio syncs in and out of time with the actors, shots are thrown up in new orders and imbued with new meanings, and the hypnotic, ambiguous script and soundtrack transform a simple scene into a richly nuanced text questioning language and communication. Infinitely re-imagined, ‘truth’ slips between loops.