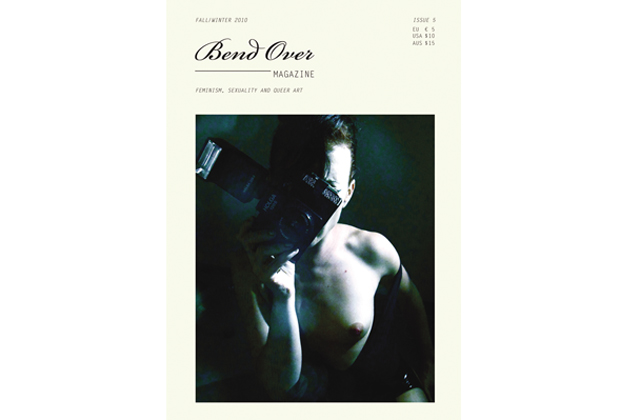 Now here’s a publication by women and for women, or at least by and for women who are queer-leftist-artist-feminists, or some variation on the theme. Bend Over, the Berlin-based semi-annual journal of feminism, sexuality and queer art, just published its fifth edition and is currently available at 13 Berlin locations, as well as in major cities around the globe.

The provocative publication is the work of editor Ena Schnitzlbaumer, aka dj Metzgerei, and photographer Goodyn Green. What began as Soapzine morphed into Bend Over in 2010, dropping the suds and getting a little dirtier.

Highlights of recent issues include stills from the video work Community Action Center by A.K. Burns and A.L. Steiner depicting playful food-fetishists of indefinable genders; an interview by Berlin underground icon Mad Kate with photographer Nikkol Rot that feels like eavesdropping on an intimate talk between artists; and an open dialogue with readers about menstruation that describes reconnecting with your body by using a cup to collect the blood.

An escapade through the often-omitted realms of female sexuality, Bend Over doesn’t shy from blatant exposure of its themes, if at times it can feel like a tool to promote a tight group of engaged provocateurs. And if you’re interested in more mainstream girl-on-girl entertainment, there’s always Dear John.

Bend Over will be hosting a photo exhibitions of portraits by editor Ena Schnitzlbaumer/Metzgerei at Fab Lab with the upcoming vernissage on March 5. The exhibition runs through March 26.

BEND OVER | The Fall/Winter 2010 issue is out now. More info at www.bendovermagazine.com