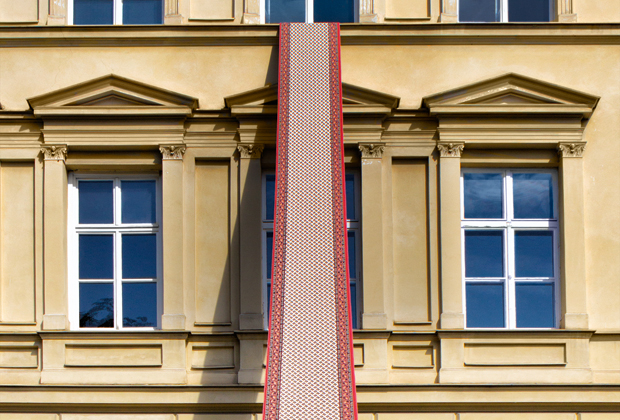 Berlin’s historic Maxim Gorki Theater gears up for its new season – with new artistic director Shermin Langhoff at the helm – by presenting the Berliner Herbstsalon, a temporary exhibition bringing together performances, installations and video works by 30 international artists residing predominantly in Berlin.

Exploring the past and present notions of being German and the formation of the German nation, the artists will utilise the historical sites of the theatre building, the Neue Wache and the Palais am Festungsgraben in order to examine the consequences of the formation of this national identity and make comparisons and links to other nations.

Nevin Aladağ examines the identity of the Gorki Theater building’s neoclassical façade in contrast to its position as one of Berlin’s most cutting-edge theatres through her installation of an overlong Oriental carpet in front of the Palais, aptly called Läufer (“runner”).

Taking place directly in front of the Neue Wache, Gorki in-house director Yael Ronen’s performance Entschuldung (“Debt Relief”) will take a closer look at the history of the building as memorial and its official instrumentation of the politics of memory.

The artist duo Bankleer will play with the Palais on Festungsgraben (the former official residence of the Prussian minister of finance), scrutinising the element of violence in the world’s current financial system and the power it has over contemporary humanity.