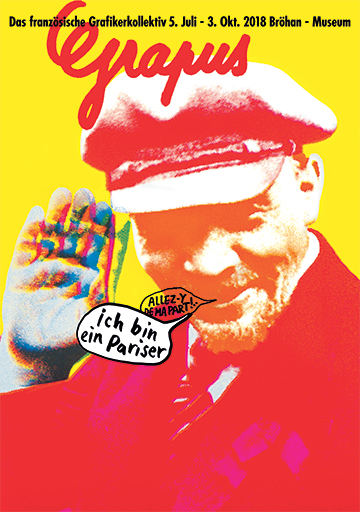 Over makeshift printing presses in student-occupied Paris art schools, three French design students came together to create thousands of simple slogan posters expressing the movement’s manifesto. François Miehe, Pierre Bernard and Gérard Paris-Clavel plastered their work all over the city each night and became the visual voice of the May 1968student movement. Two years later, the three men founded the graphic design collective Grapus.Their shared left-leaning politics saw them only take on similarly aligned causes, such as community organisations, arts projects,the Anti-Apartheid Movement and the French Communist Party, of which all three were members.You may not have heard their names outside France, but you’ve almost certainly seen the influence of their work in contemporary advertising and design. In this exhibition, Grapus’20-year existence is comprehensively represented by eight rooms filled with posters, zines and pamphlets. The best of these use clever visual jokes, bombastic colours, classic typography and ground-breaking collage techniques – none of which really seem to have dated and could easily be seen on billboards today. Unfortunately, a number of filmed interviews in French are only subtitled in German. But overall this is a fascinating trip through the far left’s causes of the 1970s and 1980s and a fulsome schooling in classic French graphic design.