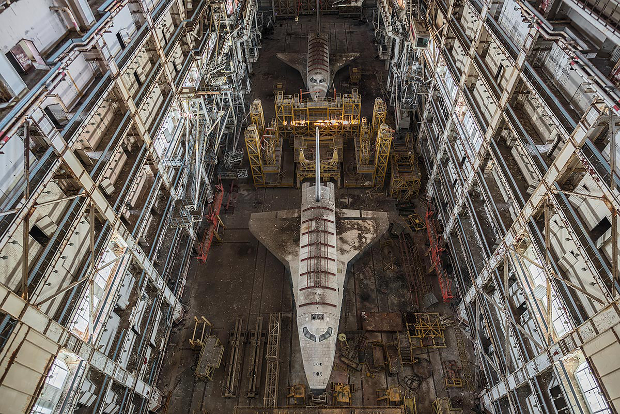 Since then, he has travelled. Extensively. From ancient submarine refuelling stations in the fjords of Norway, closed down gas stations and train tracks in the desolate landscapes of Southern California, all the way to forgotten five-star resorts on the Taiwanese coast, the explorer spares no effort in seeking the perfect shot. He returns to Berlin almost a year after his previous exhibit to continue his long-term Restwert project. Not that he likes the commonly used translation of the word.

“I’m not keen on how the Americans call it – they say ‘residual value’, but that has a monetary feel to it. It’s not about that material value.”

Indeed, Eckell is more interested in immortalizing the ephemeral and finding beauty in the decay, much like one of his influences, Romantic painter Kaspar David Friedrich. Most of all however, he searches for the story.

“It’s key to me that these photos are connected to a story, that there is a story to tell”.

In his stunning new exhibition, he refines the Restwert concept and focuses on these stories with a series of never-before-exhibited stills. Most striking are his “Broken Arrows”, shot in Nevada and depicting the long-forgotten methods used for transcontinental airmail navigation, as well as the undeniable centrepiece of his recent collection, “Space Junk”. Shot this August in a top secret cosmodrome in Kazakhstan, a facility guarded by both Russian and Kazak authorities, these stills show in absorbing detail an assembling and fuelling hall which houses abandoned space shuttles.

This fascinating slice of Cold War history reveals the Russian desire to hide the failure of what was at the time the most expensive project in Soviet history. They’d rather focus on the exploits of Yuri Gagarin.

“They have entire museums about Gagarin. I’m more interested in the history no one wants to show and I’m afraid that these stories will be buried. The space crafts are just sitting there and no one knows what’s going to happen. One of the halls at the facility has already collapsed. Maybe the one I shot is next, leaving the story to be forgotten.”

Make sure you catch Dietmar Eckell and his superb set of new prints before he sets off once more to continue his adventures. Next stop: Australia, for more abandoned train tracks, and Cape Canaveral for further explorations in space. If you’re lucky, you might get to hear some of the unpublishable stories from the man himself about accessing verboten sites and unearthing history that an entire nation would rather see buried…