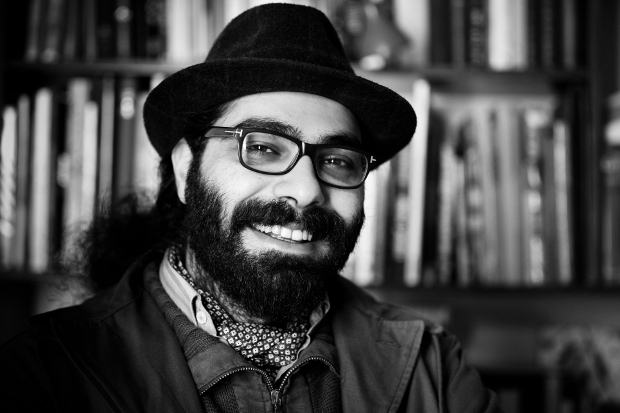 Hamid Sulaiman might have fled his home in Syria, but he’s not done with the war and the revolution.

Briefly jailed by the Assad regime for joining the 2011 freedom protests, the 30-year-old artist escaped his native Damascus (and being drafted into Assad’s army) for Paris, where, since 2012, he’s been pursuing his nonviolent struggle with hard-hitting canvases, sketches and cartoons documenting the drama unfolding in Syria. Freedom Hospital, launched last month at the Paris Book Fair, is his first foray into the world of graphic novels. From April 9, Berlin’s Galerie Crone is showing a selection of the book’s original sheets – high-contrast black and white sequences that read like the Syrian artist’s attempt to disentangle the baffling confusion and violence back in his country, evoking the tormented beauty of 1920s German expressionism.

It’s your first graphic novel. Why now? Were you inspired by the French comics culture?

Actually, that’s the reason I came to France in the first place – I had started working on this when I was in Cairo and I wanted to learn more about comics in Paris. I’ve loved comics since I was a child, but this culture doesn’t exist much in Syria and I didn’t really know how to do one. It took me four years altogether to complete this…

It’s very strong visually. Depicting horror, violence and suffering is often a challenge, but you chose to go head-on in a pretty realistic, graphic way. You even drew screenshots from Youtube videos…

I took the simple, direct way to stand against violence: by really showing it. And what I show is not just images I found on Youtube, and it’s not another planet. It’s happening for real, every day. And in several countries, not only Syria.

For a debut novel, you didn’t make it easy for yourself: it’s a polyphonic narrative with a cast of 14 protagonists, each representing one aspect of the hyper-complex Syrian reality. What’s the main protagonist of your novel – Syria? The Freedom Hospital?

In Europe in general, and not only in comic books, most stories are about one character who’s leading the whole story. This is also linked to living in Europe, where life is centred around the individual. But in the Arab world, the place is the real hero – so for me, the Freedom Hospital is the real hero. Take Naguib Mahfouz – he’s the first Arab writer to win a Nobel prize, and all of his novels are like this.

One intriguing character is Salem, who starts off as an Assad secret agent, moves on with the Free Syrian Army and ends up with the radical Islamists… Do you feel his personal development is emblematic of Syria’s?

Salem is really key to the story because he is always moving with the collective subconscious in his society. He’s an agent of Assad during the Assad regime, but when he’s in a society of rebels he becomes a rebel, and in a society with Islamists he becomes an Islamist. I wanted to show the pressure and the confusion and how who you were born, your education and the people around you affect your decisions. Nobody chose to be German or Syrian; Christian or Muslim; Sunni or Shia. It’s all society’s thinking, but these labels will stick to you.

I draw war to demand peace. And yes, I believe that all this war is related to arms dealing, with some 80 percent of all arms coming from Russia, 16 percent from America and five percent from all over the world. Meanwhile, the West is totally against war. They give people tanks and guns and then call them uncivilised for using them.

You’re a pacifist and an atheist drawing about war and religion. Was that a challenge?

Artists draw their inspiration from what they’re living. In my case it’s Syria, what I lived through there and what my family and friends still live through. I lost my best friend to torture, and I was in jail – I can’t run away from that. But I can find life in art. I lost my country, and now my country is my art. It’s somehow where I live. 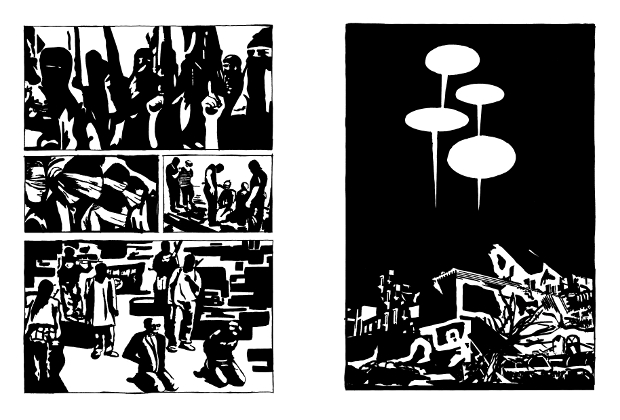 Your character Yasmine starts off confident that Assad will be kicked out. By the end, she moves from optimism to what she calls “realism” – the belief she might never see the fall of the regime. Is that something that you share with her?

We people of the Arab Spring, we were dreamers. We went to the streets and asked for freedom and revolution even though we knew we could die. It felt like it wasn’t possible to be born under Assad senior and live all our lives with Assad junior. We had that urge… If you start a rebellion, you have to be a dreamer.

You can always dream! Nobody can forbid you to dream! Yes, it’s a big war; it started as a revolution and now it’s a crisis that everyone in the world is putting their hands on. But see, after living 40 years in a dictatorship… I don’t want to say it’s normal, but these forms of extremism are in some ways natural reactions. A lot of people have different visions, and some people’s dream is to make an Islamic militia. They couldn’t express that for decades. Now it’s just blowing out… but despite it all, I feel optimistic. It’s not possible that after all of this we don’t reach democracy, we don’t reach freedom. Every war in the world has ended. There is no war that will go on forever!

Okay, but for now people like Yasmine, that idealistic young woman trying to run a clandestine hospital, find themselves stuck between Assad and the Islamists and realise that they cannot remain outside the war…

Right now in Syria, no one has the right to say that they have nothing to do with war. Freedom Hospital is about a little society of civilians engaged in a civil war. They might not want to be involved. But when you are in the war, you are part of the war. There is no way out. In the end, Yasmine understands that.

Can you tell us more about Haval, a young Kurd who finds his way out to Switzerland thanks to a cat. It’s so absurd that it must be a true story, right?

Yes. A close friend of my father always wanted to get a visa to visit his daughter in Switzerland, even before the war, but he never got one. And when the war happened, his daughter said she would try to find any solution to bring him to her. The only way she found was to claim asylum in Switzerland for the dog, and make her father its owner. Because the dog had a Swiss passport, the father finally got a way to get out and see his daughter!

You dedicated the book to your best friend.

We shared a lot of years together and moments in the revolution. I left Syria and he stayed and got imprisoned, and nine days later they called his mother to say he was dead. And on national television, they called him a terrorist who attacked civilians. I lost a lot of friends and I can’t stop thinking about this all the time.

Just after the Paris terrorist attacks, a Facebook pic of you and your French girlfriend kissing topless behind a big sign reading “Love always wins” went viral. Do you really think that?

Yes! In Europe 70 years ago, everyone was traumatised by the war started by the Nazis. And now there’s peace. You can move from Paris to Berlin without stepping over borders. Overall in Syria there are fewer people dying than in the Second World War, and our standards have changed. People’s lives have become more sacred, more respected and now we know that violence is not the solution. You need to continue being optimistic, and like we said in Paris after the attacks, we shouldn’t be afraid and we should keep going out!