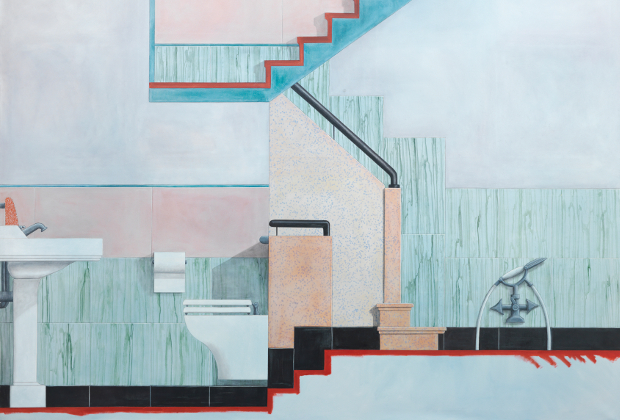 Galerie Buchholz transforms into an imagined home in Lucy McKenzie’s Inspired by an Atlas of Leprosy, on through January 23.

The immersive space, filled with grand furniture and curious objects, is unsettling in itself. But look a bit closer, and you’ll be met with a shocking realisation: every single detail, from the marble surfaces to the cup of coffee on the desk, has been meticulously painted by hand. The Scottish-born and Brussels-based artist gave us a glimpse behind the scenes of her imagined interior.

All the objects in your ‘house’ feel like clues about who lives there. Who is that?

She’s a young Berlin cultural player making her fortune. But her interior design doesn’t look the way it’s supposed to. Her oversized furniture and the marble, they’re old symbols of power. She might work for Google, but you know, these companies are still run behind the scenes by men in suits, even though their public figures show up in Nikes and a raggedy grey t-shirt. It’s about questioning the kind of dressed-down informality that we all take for granted, that’s supposed to signify some new form of economy. All the old power structures are still in place. We live in an era of fake authenticity, fake improvisation, fake edginess, and it’s about my dissatisfaction with what I see as a really questionable aesthetic. The writer Peter York outlines it all in the book Authenticity is a Con.

When you studied trompe l’oeil, a prominent technique in the show, were you planning to use it in your art?

That was actually part of a decorative painting programme I did, which also included lettering, fake wood, fake marble, and gilding. In 2007, I was already doing shows at MoMA and I was just bored. It seemed like such an easy path, and that’s just not what I wanted. So I took some time out to study something completely different. The course was only six months long, but it was so intense. We worked seven days a week and couldn’t even sit down. At art school we’re taught to explain away any failure with, “Well yeah, it’s supposed to be shit, and if you can’t see that, well then you’re not very smart.” We’re taught this kind of passive-aggressive strategy to cope with our own limits. So it was amazing to have someone say, “That’s shit, do it again!”

This goes back to the tension between form and content…

There’s an eternal fight between skill and intellectualism – the idea that somehow you can’t be a really good painter and also be critical. I set out to answer that question at the start of studying, and though I can’t completely answer it, in some ways it’s true. With those who are super skilled, it’s often that the content is missing. On the other hand, so much of the work out there could come out of this big book of ‘good art ideas’, and almost anyone could make it. I always want to be on that line between skill and ideas. I want to develop something that’s really true to my personal vision rather than trying to fit into the aesthetic of the day.

You were in the Venice Biennale by the time you were 26. How did it feel to be met with such great enthusiasm as a young artist?

I started writing a riot grrrl fanzine when I was 14, and I’ve considered myself an artist basically since I got my period. Ever since, I’ve always done these little projects with friends and that’s what I enjoy. Usually things like the Venice Biennale are just massive pains in the neck. They’re not at all rewarding. But I also don’t regret participating, because that’s where you learn a lot about how cynical the art world is.