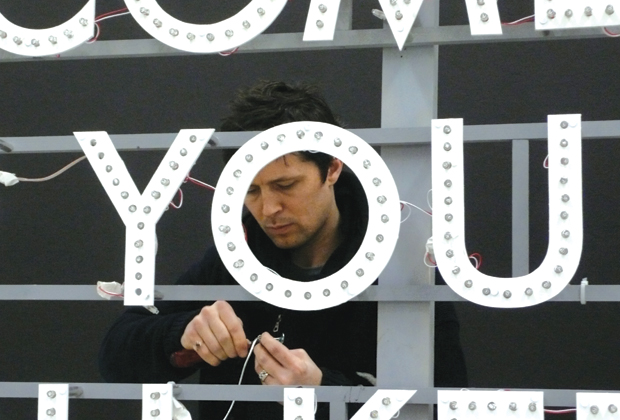 Robert Montgomery brings his word art to the billboards of Berlin.

The work of Scottish artist Robert Montgomery moves away from the cynicism of the 1990s and the Young British Artists toward a newly emerging sincerity. Trained as a painter, he eventually moved to London and became one of the core team at Dazed & Confused magazine. His text pieces have appeared, like ghostly lyrical interventions, on billboards in Shoreditch, at the Venice Biennale and at the De La Warr Pavilion in Sussex.

Working in what he calls “a poetic and melancholic post-situationist tradition”, Montgomery has brought his work to the Berlin cityscape, where his first solo exhibition in Germany opened last week on July 7.

I wanted to work with Tempelhof because of the layers of narrative history. I mean there is the fascinating, obvious one, which is the Nazi airport, the Red Army taking it at the end of the Second World War and by most accounts drowning the last of the SS command in the basement and locking it. Suddenly it becomes a ghost building at that point.

And then the Cold War layer is really interesting, obviously for contemporary Berlin. So at Tempelhof itself I’m doing three billboards, which are in front of the façade of the building.

How are you approaching the text differently at Tempelhof than with the billboards you’ve got going up around the city?

The work at Tempelhof I’d say is the most place-specific. I began writing from this amazing speech by Victor Hugo… From 1848-1853 Victor Hugo and a couple of his friends, who were French and German writers, organised this annual event called the International Peace Congress. They invited politicians and they sort of gave the writers’ vision for peace, and there’s an amazing address by Victor Hugo [in 1849], where he says he believes in this idea of a European brotherhood and that, “[a] day will come when war will seem as absurd and impossible between Paris and London, between Petersburg and Berlin … as it would be impossible and would seem absurd today between Rouen and Amiens, between Boston and Philadelphia.”

Which must have sounded mad to its contemporary audience. But we did it! So, the Berlin thing is trying to realise the positivity of what we have, the peace in Europe and the cultural integration in Europe that we’ve achieved over the last 100 years.

Of course, the economic problems are serious. I accept that, but I think it’s really important to remember we have achieved something with the European project. Everything Victor Hugo wanted came true in a sense – we’ve done it without really realising it. You can really read Berlin like a library of the disastrous history of the 20th century, with its wars and destruction; side by side you have the Holocaust memorial and Hiroshimastraße – it’s just this little street I noticed – and that’s like a quiet reminder that it wasn’t just the Nazis who caused abominable destruction in World War II.

I think it’s really easy to see the difficulties currently in Europe, and so it’s really easy to miss the profound historical beauty that we managed to achieve in 100 years. So in a way, for once my work is not a political protest but sort of a celebration.

Can you explain your fascination with billboards?

I feel like I’ve been sort of forced into it, because billboards drive me mad. I feel like I just don’t have the psychological armour to protect myself from them. They get me down and make me feel yelled and shouted at, so I felt compelled to work out a way of talking back in that space so I didn’t feel insane.

Also it was a lot of things that I’d grown up studying, like post-structuralist theory and theory of the text and that comes from Baudrillard and Roland Barthes and Guy Debord’s ideas of spectacle, and trying to actually find a way to put those into practice. The work is consciously placed halfway between contemporary art and poetry in a sense. The point for me is the anonymity. It should appear to you like some strange ranting of a madman or the musings of a poet of whatever…

Is it also art for the street masses?

Yes, I want that audience of people at bus stops who I think can engage in contemporary art discourse without having to have a certain knowledge if you make work that isn’t obscurantist, and so it’s this balance of making work that’s rooted in conceptual art tradition but remains accessible to passers by.

Your billboard interventions are quite poignant, rather than ironic. There’s a sincerity to them.

Yeah, I don’t want to be ironic. I don’t feel that I study from an ironic post-Duchampian school. I feel more from a post-Beuysian school – things that aren’t just about nihilistic Duchampian irony but are rather about questions of spirituality that are genuine and tend to engage with society and politics. I think in London that discourse has been largely shut down for my generation, just because the [Young British Artists] were so good at perfecting that post-Duchampian irony, that it’s sort of been done already.

You also work at Dazed & Confused within the commercial side of the magazine. Has that forced your hand a little bit?

Do you think you’d have been making what you make without being quite so entrenched in that world?

Maybe not actually. I mean it’s definitely given me a point of view that’s clearer. I wouldn’t have done that job for any other magazine except Dazed. I only did it because when I was 15 in a small town in Scotland, Dazed and ID and The Face were about the only fucking culture you could get for a hundred-mile radius!

The university library in the Scottish comprehensive system in the 1980s or early 1990s, these things were really crucial to me for discovering stuff that would become really important in my life, giving me a culture that I could be part of. So I kind of kept doing it for those kids who are 15, who live in Coventry or something, who don’t fit in at their high school and are a bit strange and a bit sort of bookish and odd like me.

One of your poems for Tempelhof reads: “Echoes of voices in the high towers, all wounds explained, here all knives bandaged…”

That comes from my real sense of the first time I went to Berlin maybe five years ago of it being this kind of amazing place of healing… and regeneration and young families and optimism, and I think it’s also become one of our genuinely actually creative cities in Europe. “All knives bandaged” comes from Joseph Beuys because if you get cut by a knife, if you bandage the wound, you only heal the wound, but what if you bandage the knife? It can’t cut anyone else.

Out of all your poems in this project, what’s the line that sticks with you the most?

Definitely the one that people seem to like the most is: “The people you love become ghosts inside of you and like this you keep them alive,” which is the one that lots of people have tattoos of now and stuff. It’s weird, that one. It was inspired by the death of my best friend.

What would be your desert island poem?

“So Many Lives”, by John Ashbery. It says: “Sometimes I get radiant drunk when I think of and/or look at you/ Upstaged by your life, with me in it./ And other mornings too/ Your care is like a city, with the uncomfortable parts/ Evasive, and difficult to connect with the plan/ That was, and the green diagonals of the rain kind of/ Fudging to rapidly involve everything that stood out,/ And so in an illegal way, but it doesn’t matter,/ It’s rapture that counts.”