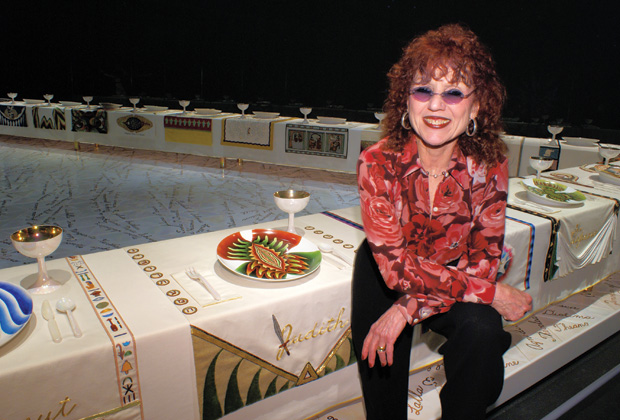 Judy Chicago, figurehead and proponent of the feminist art scene in 1970s LA, is best known for her work “The Dinner Party”, a triangular table with 39 place settings depicting female genitalia and named after women from Virginia Woolf to Georgia O’Keeffe. Without her, feminist art practice would have had an even harder time emerging to the forefront of art discourse.

This month, her inclusion in the huge Pacific Standard Time exhibition shows what perseverance can do.

I arrived in 1957. To me, after growing up in the Midwest with freezing winters and hot, humid summers, LA was a sort of paradise. I began to appreciate the freedom and spirit of self-invention that characterised the environment of the LA art world, but it was also very inhospitable to women, so in my first decade of professional practice I had a difficult struggle.

What are the basic themes of your feminist art?

There was no such thing as feminist art until the early 1970s. In fact, some historians say that the first use of that term occurred in my journal in 1971. All I know is that after a decade of trying to rid my art of any hint of gender in order to be taken seriously as an artist, I was sick of pretending and decided to create a feminist art practice. The first step was the Fresno Feminist Art Program where I helped my students feel free to make art that openly drew upon their experiences as women. It would take 40 years before these works were understood.

Is there a ‘female view’?

Until the advent of abstraction in art, women artists were not able to openly express themselves as women. With abstraction, women could invent forms to represent their experiences, and with surrealism, they were able to use the surrealist framework to deal with personal (and female) subject matter. Since the emergence of feminist art in the 1970s, more and more women artists around the world feel free to be themselves in their art, which was impossible when I was young.

What are you working on now?

Since 2003, I have been working in glass. I’m trying to transform what has been a decorative material into a vehicle for personal meaning. I’m [also] working on a book that critiques university studio art education, which keeps pumping out more and more MFA students into the tiny distribution system for art, leading to a lot of overly academic art along with young artists who all believe they will become art stars.