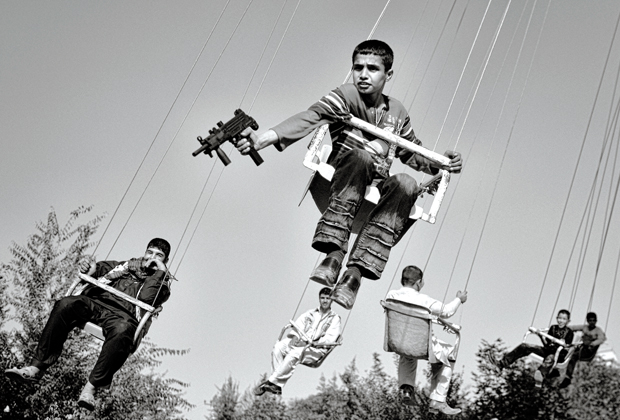 In a city saturated with its own history of political terror, the 10th anniversary of September 11 sees major Berlin art spaces C/O and KW revisiting images of terror to explore our cultivated mistrust of an image-mediated reality.

In the smaller of two shows at C/O, Pulitzer Prize winner Anja Niedringhaus (photo) presents straight-up war photography in At War: trenches, teary soldiers and POWs inhabit the space alongside the famed image of George W. Bush presenting a turkey platter to his troops.

The AP-commissioned collection spans 20 years, from the Balkans to the wars in Iraq, Libya and Afghanistan. Technical precision is combined with an avoidance of sensationalism, conjuring beauty in the grimmest of scenes.

In the neighbouring rooms of C/O, The Uncanny Familiar . Images of Terror navigates enthralling images culled from Spiegel archives, mixing photography and painting with news footage and video art from some 30 artists.

The exhibition chillingly illuminates our problematic habits of perception and our reliance upon cadaver-heavy images.

Down the road, KW presents Seeing Is Believing, an exhibition of video, installation and sculpture that responds to a world of instant viral dissemination with hyperbole and satire.

Entering through a disorientating, pitch-black basement room emanating a droning din, one is greeted by the lax, joking face of Bush rehearsing sombre facial expressions for his imminent declaration of war, an accidental recording that Gianni Motti appropriated for his video-loop piece “Shock and Awe” (2003).

Perhaps Bush is too easy a target, but it sets the mood for the 22-artist group show, highlighting both the absurdity and immense power embedded within these reality-creating images.