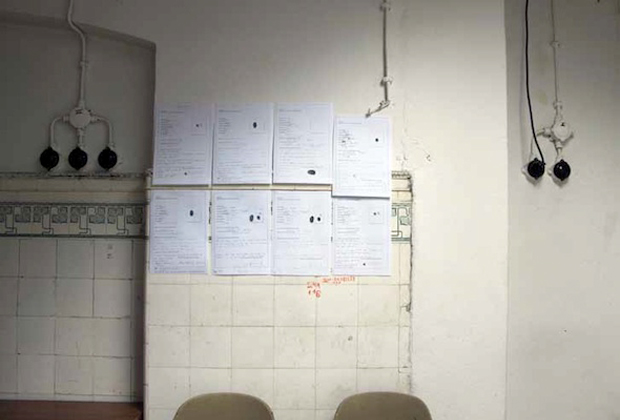 As part of this week’s art and culture festival, 48 Stunden Neukölln, from June 15-17, the brilliantly surrealistic performance-art duo Ze Coeupel, composed of artists Ambra Pittoni and Paul-Flavien Enriquez-Sarano, is interrogating the city again, so prepare to get under the lamp, fill out those forms and try not to sweat so much as you are forced to tell your “truth”.

S.A.V.E. Berlin Census began in Exile, a contemporary art gallery, with a one-month performance in 2012. Now, they are going to be in Heroes Bar for 48 stunden Neukölln. Their goal? Illustrating the existing or possible dialogue between the many spaces co-living in Berlin.

Inspired by Exberliner’s own Save Berlin Fest in 2009, they created S.A.V.E., the multiform investigation agency, an on-going project with the aim of challenging individual passivity and using their specific form of contemporary art for social and cultural upheaval. Their performance focused on Berlin’s inhabitants and their relation to the city’s potential futures. Sounds lofty, but the experience between interrogators and its subjects fleshes the concept out in visceral way.

S.A.V.E., an acronym that “stands for nothing” according the Ambra and Paul-Flavien, has even grown wings and travelled to Milan and Marseilles, the pair have collected a mass of engaging multi-sensory material, ranging from fictional signed photos and bureaucratic documents, staged press conferences and audio recordings. They often interrogate their participants with the aim of interrogating, too, the notion of reality. The tactic, they hope, will destabilise their interviewees and thus open-up and renew dialogue, liberating it from any predetermined social dynamic. In the end, asking, especially, whether Berlin is really the artists’ paradise that it seems to be.

The recent issues and discussions that are shaking up Berlin, including the open letter Haben und Brauchen (To Have and to Need), justified their decision to create a comprehensive artists census and begin their ‘artistic archiving’; asking, especially, whether Berlin is really the artists’ paradise that it seems to be. Beyond the emblematic Berlin artistic community, they try to question artist condition, the lopsided relationship between city, cultural institutions and artists.

Don’t miss them at 48 Stunden Neukölln before they whisk themselves away to Poland for episode an episode at the Centre for Contemporary Art Ujazdowski Castle in Warsaw, through August 31, where their office will turn into an ‘urban planning agency’.