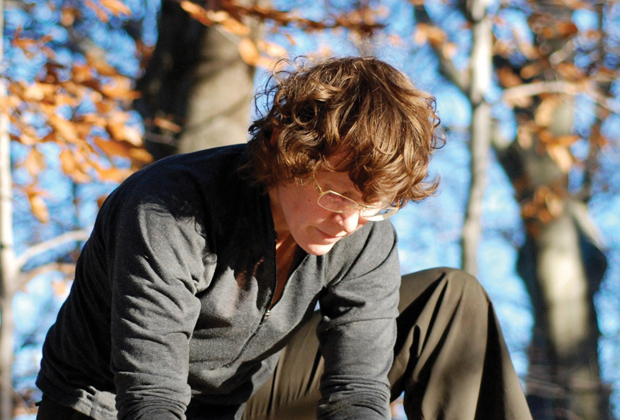 Known for her process-based works, the American artist takes hikes, stopping every hour to select something from her immediate surroundings through a Cagean chance mechanism that she has fine-tuned for her purposes. Placing linen over the chosen subject and rubbing it with ink, Mirra marks the material, documenting the ephemeral encounter.

Her series of large prints and audio recordings, currently installed through the entirety of KW, was made through a closed cycle of walks that took place over 30 days in the regions of each of the three partner institutions – the Bonner Kunstverein, the Museum Haus Konstruktiv in Zurich and KW Institute for Contemporary Art in Berlin – culminating in a four-channel sound installation on the top floor. The result is a unique work of documentation.

But what is it about the outdoors that holds her attention?

How did you come by the title of the work?

Field Recordings sort of happened, just because when I was out making the work, I realised how similar it was to aural location recordings, in that often they rely on the space in which they are being made. They tell you a certain thing about that place, but a lot is left out, very unlike a photograph, where a lot is left out but there is a kind of assumption with pictorial representation that most of the information is there.

With the prints and the sound recording it is clear that there is a lot of stuff missing. The print works really feel like sound waves, as far as what they look like from a distance: they are sort of erratic, broken, horizontal lines.

The term ‘field recordings’ obviously has scientific relevance. Is there a scientific process to what you do?

I would say it’s near scientific. When I’ve been walking and printing, I don’t see anybody. But if once in a while someone did come upon me on the trail and ask me what I was doing, I would say this kind of vague thing, that I was doing field research as a scientist, and avoid the conversation of this sort of dorky thing about being an artist. I had a botanist and a geologist come to my studio to help me do some identifications of materials, and I asked, “Is this just like really bad amateur botany to you?” And he said, “This isn’t botany at all.”

There is a lot of mention of nature in relation to your work and the body within nature. In a way it’s romantic, and in another, conflicting?

I like the sound piece because it’s mechanical – I see it as more romantic than the experience of looking at the prints. It’s cosy to listen to those sounds and undertones – as far as emotional response, that’s where you could feel warm and fuzzy.

I go kind of bananas with this idea of nature: you could talk about the nature of something but you can’t talk about ‘nature’ in itself. When people do, I don’t really know what that means, because whether it’s romantic or not, I think it’s a false idea that humans are outside of the rest of the world.

That’s quite interesting with regards to the city and the country and the body and the brain and how all those things can be seen as opposite, but actually they’re all interconnected.

The thing about Berlin for instance – a lot of them are cut tree trunks, so you can see the rims of the trees, so you recognise that it’s a tree, but more strongly you can see the cut from the saw, from the chainsaw, so there are those two things that are simultaneous. They are a very strong illustration to me. There is this relationship between the industrial and the mechanical. Similarly, the cobblestones of Berlin: it’s rock, but its also a built environment.

In contemporary Western societies most people spend most of their time inside. Do you view the idea of the outdoors and re-claiming or re-experiencing it as an alternative or something that can be re-imagined as one, in a broad way?

I hope it’s not seen as prescriptive, but certainly if anyone asks my opinion… for millions of years, not only every other mammal has lived outdoors, but also those of us who have walked on two feet, and spent almost all of our time outside. I’m not beating my chest for caveman stuff, but there is something about it.

Living within a built environment is so extremely recent, and I figured out that my brain works when I’m outside and I’m moving…

What kind of thought processes do you go through on your walks? What are the discussions most present in your mind that you want to provoke? Or is it a more reflexive creative process?

I would say it’s pretty reflexive, but my concerns are the difference between having a field practice and a studio practice, and perhaps the solipsistic nature of the studio practice – what it means to be outside and moving, or if it is considered central to the so-called intellectual work.

I am interested in the fact that movement comes from the spinal cord and the brain, the difference between movement and action, work and labour, rest and labour.

You can’t describe the work that I’m making as lazy, since I’m walking all day, but I don’t feel like the work is claiming importance because of labour.

It does seem that the idea of ‘spending time’ is quite political – what you do with your time, how time is prescribed, what leisure time is. People commonly spend their leisure time hiking, and the idea that you’re appropriating that in the form of work is, I think, a political dialogue…

It’s been important to me before this project, but it’s actually only materialised as I’ve figured out how to make work through walking.

The separation between means and end – sooner or later, you’re going to have a crisis if you’re always performing for an end result, which is so endemic in all fields and is often romanticised: “I am suffering and it sucks, but it’s because of this thing that will happen later.”

Instead I said, “How do I want to spend my time and how can I do that?” So in that way, it is certainly anti-capitalist. It’s a shift to the present, rather than the future. It certainly changed my life.