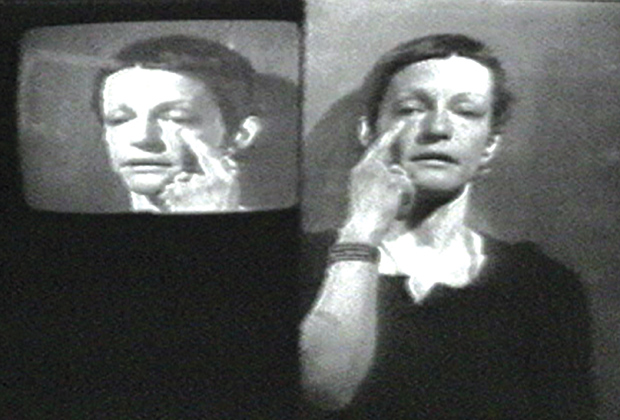 Artists from all over the world converging on a gallery in Berlin to experiment with new art forms. Mitte in the 1990s? Kreuzberg in the 2000s? Try Ku’damm in the 1970s. Before the modern-day artist enclave explosion in the former East, Mike Steiner opened an artist hotel in the Wild West, followed by his Studiogalerie where avant-garde performance artists played with video for the first time. Steiner collaborated on and collected over 500 tapes, a small fraction of which are finally on display at Hamburger Bahnhof, revealing the original Berlin art underworld.

You are originally from Berlin. Did you study here?

But then you went to New York. Why?

First there was my personal interest. This led to a commissioned work for a school, a kindergarten, to paint a wall piece, enabling me to stay for several years. I was originally a painter. After New York my work shows a strong American influence. It was a real shock to me. Before, I had been working in an abstract expressive style. Then I experienced Minimal art in New York. They were 10 or 20 years ahead of us.

You opened a gallery when you returned. What led you to try the business side of art?

Well yes, that was in 1974. I had been running a business already. I was the owner of a small art hotel that opened in 1970, and after three or four years I wanted to become active again. At that time, I had been working a lot with Minimal art, but also with film, and I had a real urge to do something.

Did you do it alone?

Yes. I had an assistant who sometimes helped me. But this was really painful work. I worked day and night. I paid the artists money, and at the time it was a real issue to get the necessary equipment, like big cameras. Back then, they were really expensive. I made the equipment available to the artists and did the filming myself.

Have you ever been in front of the camera?

No, always behind it. Where did you learn to work a camera? Intuition. It was media-driven work, which means, in the field of video, it was mostly about positioning and installing the camera.

Was this something completely new at the time?

Yes, in that sense, we were pioneers. Basically, it was all dead here in Berlin, when it came to new media. I was the very first one who did something back in 1974. The word spread. I received mail from artists, and I only had to choose whom I found interesting. Some I already knew: Marina Abramovic, Ulrike Rosenbach and so forth.

But there was no understanding of how to collect this new art, how to market it. How could you be successful as a gallery owner?

I was not successful. Success came only much later. In 1980, they started cable TV here in West Berlin. And I reserved a channel. This was a way to rework the tapes, to talk with the artists about the current and previous works and to broadcast this directly. This was a revision process. Also, we had no idea how long these tapes would last. The Hamburger Bahnhof has now digitalized them. Back then, people said, “at most, 20 years”. Video has become standard. But not necessarily better, in my opinion. By now, performances and video have become superficial.

Did you feel like you were part of a movement?

I didn’t feel anything. Actually, it was just an urge to explore what artists could accomplish with the new media. Some worked with video, some did performances. And this was at the same time the beginning of performance and video, the recording of them.

Do you work with today’s young performance artists?

No. Now, I am painting again. This is hopelessly outdated. But to me, this is the best there is. And I have tried to link back to my student days at the university of fine arts. I have made a clear break with video in order to paint, to be happy.

Is this the difference? Painting makes you happy? Yes. Well, the production of a tape is also satisfying. But back then it was just about exploring what could be done with the new medium.

You are a Berliner, have lived most of your life in the city. What do you think of the development of Berlin as an ‘art city’?

Thanks to reunification, Berlin has become an art metropolis of the world, next to New York. I am an adamant visitor of gallery openings, by which I mean, I inform myself.

How is the art in Berlin?

Just as in New York, only a bit better. There are many galleries with money that came to Berlin, and the artists are not complaining about a lack of buyers.

I work every day.

Are you influenced by the current Berlin art scene?

Yes and no. I dislike most exhibitions. They bore me. I go everywhere, but I know what to expect. There has never been so much painting and art-making before. It is too much. Even the Berlinische Galerie. I actually cannot stand idols such as [Rainer] Fetting. I think he is a bad painter.

He has an exhibition now in Berlin.

There were so many international artists on your tapes. Why did they come to Berlin?

Most of them were invited by the DAAD. This was the only institution in Berlin at the time that was interested in real and contemporary art. They invited people over for a year so that they could work here.

Were there many Berlin artists? There were some Berliners such as [Karl-Horst] Hödicke. But the Berlin-born artists are actually not very relevant.

Do you relate to the label ‘avant-garde’? Do you think it is appropriate for you?

As a video artist, I was avant-garde. As a painter, I am a traditionalist.

In the end, everybody is a traditionalist.