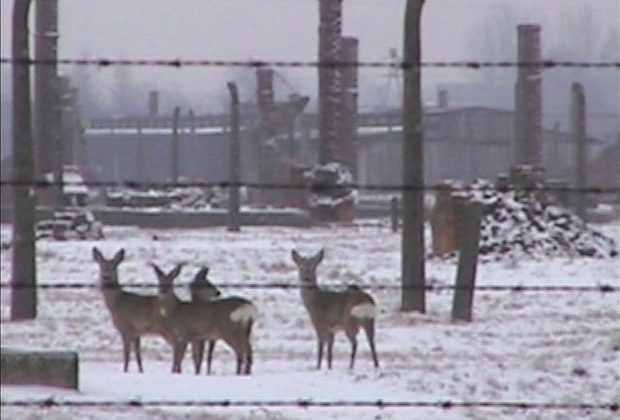 With the solo exhibition Fragment, the Akademie der Künste is currently showing a selection of video works by prominent Polish artist Mirosław Bałka, taken from footage he captured on journeys to the sites of concentration and death camps.

The projections take the viewer through fragmented images including deer grazing in snow behind barbed wire and a disorientating floor projection where showerheads loom in and out of the shot. The final room holds the work “Carousel”. Here the viewer is placed at the centre of four spinning images. Glimpses of grey huts and snow-topped sheds, familiar yet unknowable, give an indistinct but strong impression of the landscapes and histories Balka’s images hold.

What is the experience you want the viewer to have?

Obviously the experience is very individual; I don’t think my task as an artist is to project an expectation of experience. I just wanted to impress myself with the choice of the work and the way they are connected. I did it for myself first, because I am always the first visitor.

As a visitor, the experience of moving through the show is interesting; you have to move all the way down and then back.

I was interested in creating two passages. One is in the ticketed exhibition, and [the other] is an outside passage that starts at the entrance to the building.

In the first one, there is no exit – you go to the end of the blind street. One is the road with end, and one, the road without end.

In the latter you can think that you are more free, but this is not true because we are never free. We are the elements of the chain, and each element has its own beginning and end. So it is just saying honestly: there is no freedom.

That’s quite interesting with regards to narrative, the idea of everything having a beginning and an end. Is the idea of rooting trauma in fragmentary experience, as opposed to narrative, something you think about?

What’s your attitude to representations, like those from Hollywood, that create an entire narrative or perceived whole?

I try to make the connection with Hollywood, as you notice with one of the titles of my movies, Bambi. When I made the video, I found out that Bambi by Walt Disney was made in 1942, and that’s why I gave the title to the little deer I filmed in Birkenau, because in January 1942 was the beginning of the Holocaust and all of America was crying at Bambi.

The discourse about the forms comes later. Most of the video works I made were a kind of pilgrimage to these places, and my companion in this pilgrimage was a video camera. With the small camera, I had the possibility to hide it and to hide my presence as a video maker.

I prefer to collect bits and pieces and to stand on the side of the poetry, on the edge of these places. In this way we are much more free and have more possibilities to discuss the subject, not in such a pathetic way as Schindler’s List or The Pianist.

I think in general poetry has many possibilities, much more than prose. Adorno questioned if poetry can exist after the Holocaust and I think that, yes, it has to exist – it’s the only way. That’s why poetry was invented, to help heal people after things like the Holocaust.

Presumably it can never heal?

It will never heal 100 percent, because there is always the salt in the wound; that’s why very often I use salt. Salt that makes tears, salt in the bottom of the shower floor or ceiling. From one side salt is very pure and clean, and from another side it can be very painful once you add it to the wound. On the one side beauty; on the other, the possibility of pain.

How do you create the final edit for the short films?

My process is called “the process of vacuum cleaner” – so me and my camera, we are vacuum cleaners. I choose the area I want to clean, then I switch on the camera. Then there’s a full vacuum cleaner and I’m not able to collect more. I go home to my studio, open my vacuum cleaner camera, put the dust on the table and often there are a few seconds in 60 minutes of tape which I use. What is important for me in editing is making a loop.

Because I think that the fact that you don’t see the beginning and the end – it’s almost a sculptural gesture, the three dimensional. It’s not just a line – it’s a circle, which runs closer to mantras or Catholic prayers containing elements of repetition.

The element of praying by looking is something that is important to me. I want to make works where after 10 seconds, you’re in or not, but you’re not thinking about the beginning or end. The loop gives you possibility.

I don’t know what will happen in five minutes and you ask me about the future! First I have to make one step to make another. I believe in the experience of every step. I’m just making the step then later with the perspective of time, I can name the step, but when I make it, I just try not to fall down. I have to find the right weight on the leg that makes a step, so I have to think about how to put my feet on the ground.