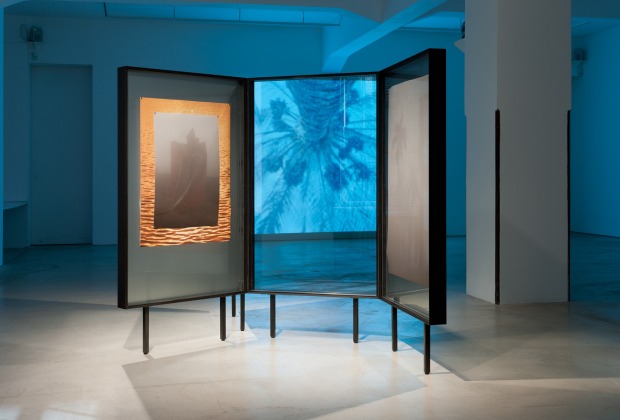 In The Sun is Late, Adrien Missika’s first solo show in Germany, the young Berlin-based French artist assembles footage from trips to Lebanon and India, where he participated in the artists-in-labs programme and worked with scientists at the National Center for Biological Sciences.

Paravents, vitrines and screens are placed in dialogue with the windows, daylight and artificial illumination of the gallery. The result explores themes of light, perception and time, asking, ultimately, to whom is the sun answerable? And can it in fact ever be late?

It sounded like a novel title. It’s a real paradox, and I love paradox; it calls up the imagination but also light and time theories. I just returned from the residency with scientists and this experience changed the way I see things, but I still consider what I do closer to visual poetry. Galerie Crone has these big windows that I’ve been covering with darkening film, so the show is more or less in the dark, depending on the time of the day you visit it. The light quality is altered, from pink in the morning, it becomes blue in the afternoon, and black mirror at night. The actual, real weather has a direct effect on the experience of the show.

In your film Dome an unfinished building turns into a giant musical instrument. What is the relevance of transformation?

I think I am interested in the displacement of the functionality of things, or their potential dysfunctionality. The point of departure of most my works, whether historical or geographical, is objects or places of the world that attract me. Then I like to bring them somewhere else, operate a slight mutation or displacement.

Seeing the world as much as possible, virtually and physically via Easyjet and Google Earth. I also like the gaps in collective memory, what we remember and how, especially iconography.

Who’s your favourite artist of all time?