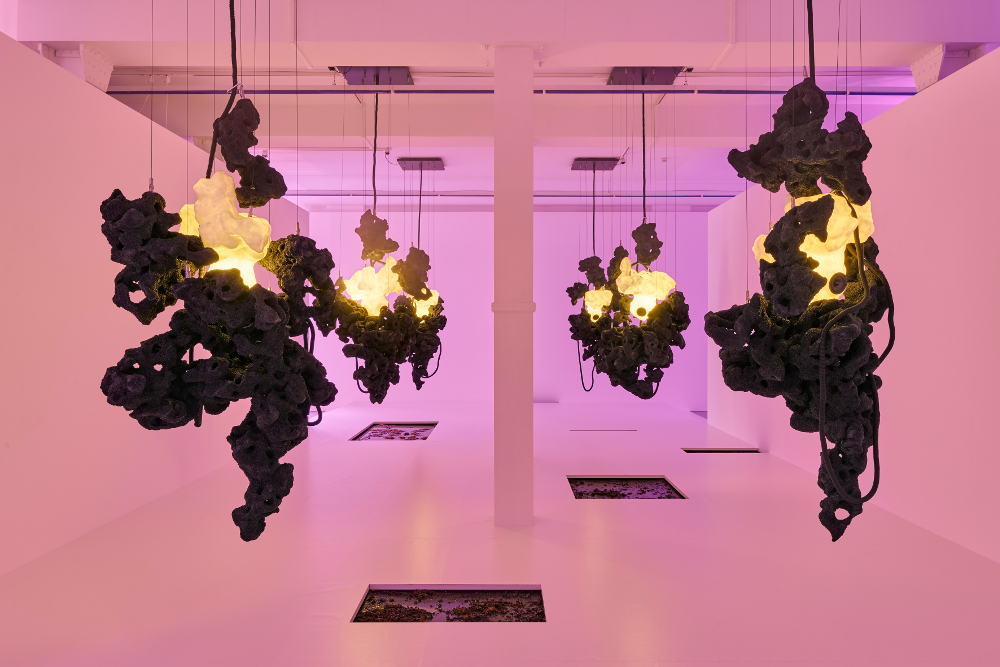 The title of this first Berlin solo show for Gréaud is two anagrams of his own name, an opening telling of a certain self-regard – a first impression later sustained by a string of pseudo-highbrow references. Like an architectural model, the gallery has been sectioned into five spaces, the largest of which houses the installations Spores (1) – Spores (6) and Tallinn. Large throbbing and glowing structures hang like overgrown sci-fi grapes over black pools of water containing moss and rusted bits of metal. We are told the artist collected these from the Jägala power station, the location for a 1979 Tarkovsky film. While the spores emit ghostly tones, the neighbouring MACHINE, a tree made of ashing neon tubing, metal and white painted branches, occasionally puffs out disco smoke. In somewhat of a departure is Study for Solipsism (2), (4), (5), (7). Hung at waist height blue walls in a slick carpeted salon environment are seven small watercolours of poppy fields. The artist informs us that his medium is not only watercolour, but also heroin. Gréaud’s work here sits alongside the likes of Pierre Huyghe, Philippe Parreno and Banks Violette, indeed putting him in good company. However, he could do with toning down the posturing and letting the work speak for itself.