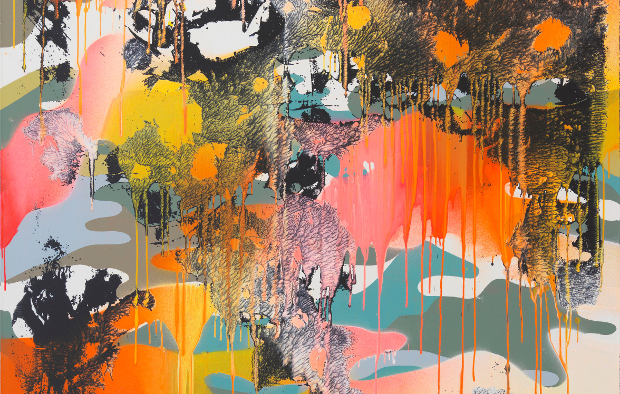 Berlin-based Swiss artist Christine Streuli believes in using colour to convey her emotional state, with each work representing a feeling or experience that she had during its creation. She tries to avoid overt interpretation, insisting her technicolour swirls, splashes, stylised orals and geometric patterns are purely about the craft of painting. But in pieces such as the one above, you can sometimes see at least a little of what inspired her. “Warpainting E” is part of a series that uses a camouflage pattern where the paint is smudged and left to drip, perhaps hinting at the grisly reality of war but also giving viewers an insight into Streuli’s painting process. It’s works like this that garnered Streuli the 2017 Fred Thieler Prize for Painting, an award for mid-career artists that comes with a rather sweet €10,000 purse and an exhibition at the Berlinische Galerie. See it for yourself from March 18.

This highly anticipated show of new work by veteran German artist Anselm Kiefer comprises just three paintings and two books, but the size and complexity of the work gives viewers plenty to look at. Taking a close-up look at how the materials are plastered, layered and scored onto the canvas is just as commanding an experience as seeing the entire piece from a distance. Each work is dedicated to an author. “Waldsteig” (“forest path”) is for Adalbert Stifter, an Austrian writer known for his vivid descriptions of rural landscapes, and leads the eye under a leafy canopy of greens and purples. “Geist über den Wassern” (“ghost over the waters”) interprets a poem by Goethe and is an exercise in pathetic fallacy where the “wavering human soul” is represented by the state of the natural world. The final work, “Herbst” (“autumn”) dominates the entire back wall and places the viewer on the bank of a great lake while an enormous, corroded metal book hovers in mid-air. Kiefer’s critics argue that his use of historical references is just as heavy-handed as his application of paint, but from this perspective it’s hard to see that as a negative.

Georg Kolbe: In Berlin’s Modernist Network (through May 1)

To celebrate its namesake sculptor’s 140th birthday, the Georg Kolbe Museum is commemorating not only his work, but his network. Kolbe was a key figure of the arts scene in the first half of the 20th century and had a far reach into the worlds of politics, dance and architecture – talk about squad goals! The exhibition opens with busts of Kolbe’s contemporaries such as the painter Max Liebermann, the first president of Germany Friedrich Ebert, sculptor Renée Sintenis and tender depictions of Kolbe’s wife, Benjamine. Alongside some of his most famous works, the lower floors explore his connections to politics and dance with studies and sculptures of famous dancers of the time like Vaslav Nijinsky. If you’re looking for info in English, you’ll find really comprehensive iPad presentations – just after you weave through the sea of heads – that delve into the history of the artist, his work, and his influence. The bright and airy museum itself, Kolbe’s former home and studio, is a treat to visit and well worth the trek out west.