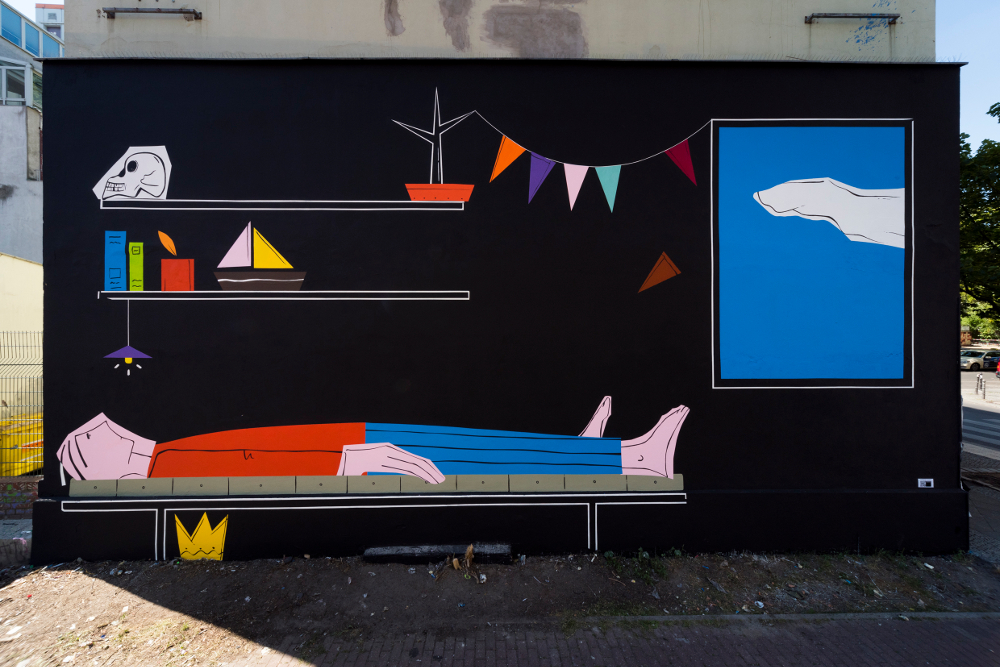 Artist Wolfgang Lugmair on spicing up Manteuffelstraße with a bold new mural.

Right on the cusp of Kreuzberg 36’s more bustling streets, the tiny KWADRAT gallery occupies a quieter space on Manteuffelstraße, right between a schoolyard basketball court and a quiet cafe. But the gallery, and the street, recently received a bit more colour in July when artist Wolfgang Lugmair, with the help of gallery owner Martin Kwade, unveiled his large-scale mural Drei Uhr nachts und noch lange nicht hell (“Three O’clock at Night and a Long Time Until Dawn”) on the side of the gallery at the opening of his exhibition TagNachtLuftWind (“DayNightAirWind”). And the painting of the colourfully red-and-blue dressed man against a black background, seems to have pleased the residents – even Kreuzberg’s nightcrawling graffiti artists have left the piece alone so far. Check out Lugmair’s other works and (hopefully) the mural through September 1.

How did things come to be with you and Martin?

Two years ago I painted a wall [mural] in Mexico City and I’ve been thinking about doing something in Berlin ever since. Last year, I saw this wall here and started talking to Martin, suggesting we do something. The landlord had also mentioned to him that he wanted to change the building a bit. So when we were planning my exhibition here in the gallery, I made a sketch, and we showed it to the landlord, and he said okay, let’s do it. It took about a week to think about, plan it and sketch it out, and the process of painting was about one week too.

Was the design made specifically for the neighbourhood and the area, or was it something else that inspired you?

What were your favourite reactions to the mural?

There was one teacher who came out to the courtyard and was slightly worried about the skull that I had painted, because of the children. He might have been scared that it was not suitable, but he ended up liking it when he returned two days later. A 12-year-old told me he liked it and older people came along and said, “We don’t get it, but we like it.” Everybody in the neighbourhood comes out, and two or three days of work are enough to get to know everyone, the smaller ones and the older ones. It was an adventure.

Were you nervous about the result or what would happen to mural when it’s done?

I knew it won’t be easy to make. I thought it would be a great experience. I only wanted it to still be there for the opening. There was actually one guy who asked me when the piece will be finished so he could put his tag on it. I invited him to the opening to have a beer. But the guy never showed and neither did his tag. I hope that the mural will last for at least a month though.

How does it feel knowing that this piece might be very temporary?

For me its okay, that was part of the idea, so I’m okay with it not existing for 100 or 200 years. I actually like the idea. The wall is doing its job. I’d like it to last a little longer, but if tomorrow someone were to decide paint or graffiti over it, we wouldn’t call the police.

What made you most proud of the mural?

I’m not exactly proud of it, but I think it’s a good piece and a lot of effort was put into it and I am proud that people like it. It makes me feel more lucky than proud, I guess. To me it’s more of a present to the neighbourhood and the people. I don’t know if they all like it, but I think most of them do and that all makes me feel really lucky.