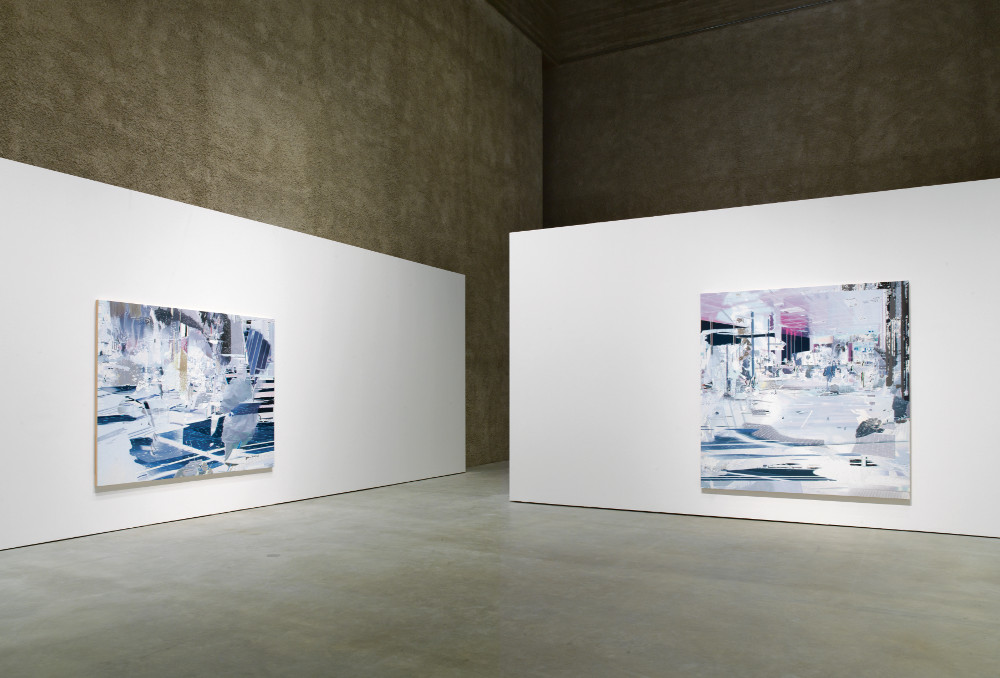 Painting’s cyclical death and rebirth over the last decades has only proved that the beloved medium is here to stay. This year’s exhibition season kicks off as no exception, but with a particular 1990s touch. The common theme: image-making technologies interplaying with a celebration of the act of painting itself.

At König Galerie, Berlin-based German painter Corinne Wasmuht’s six mural-sized paintings (photo) line a white box gallery built within the nave of the former church. Perhaps the details of these pictorialesque worlds would be lost if they were hung directly on the textured brownish-gray walls, but I still wish artists would work with this unusual venue in more inventive ways, instead of making overt attempts at fighting it. Nonetheless, it’s worth popping in for works like “May 11th”. Spanning nearly 3.5 metres, it resembles some great down-sampled version of Julie Mehretu or Matthew Ritchie’s work with its blender view of interior space on top of interior space, digitally scraped and then reassembled brushstroke by brushstroke.

Lee’s paintings are reminiscent of drawings made by children on iPads.

Since the 54-year-old Wasmuht has literally been exhibiting since the 1990s, there’s no retro-surprise here, but Austin Lee at Peres Projects is a different story. Just five years out of Yale, the American painter presents his first solo exhibition in Berlin, simply titled Tomato Can. Like Warhol (or later Michael Majerus), Lee’s work sits at the forefront of image-making technologies, contemporary (pop) culture and art. Like Wasmuht, Lee’s paintings also start as digital sketches, but here are airbrushed using high-contrast juxtaposed colours to recreate our experience of the screen. Reminiscent of drawings made by children on iPads, the imagery created for each piece seems as random as the next – tulips, abstract shapes and blotchy figures, a shifting palette of subjects and moods. But the overall effect evokes attraction and repulsion, something more akin to that feeling you get when you know you’ve stared at your computer a little too long, yet are still too entranced to pull yourself away.

For something completely different, head to Arndt Art Agency (A3) to see the current solo exhibition Planted by Filipino painter Nona Garcia. These hyper-realistic oil paintings present plenty of visual and verbal puns, starting with the title of the show. By painting with oils on wood panels as if they were wood veneer, depicting objects – a carved deer head, toy rifle, relics, etc. – materially constructed from wood and trees, the artist succeeds at a visual sleight of hand that points back to the materiality of painting itself. In a related work, 2017’s “This is not a gun” (2017) Garcia’s oil painting of a wooden toy gun is presented next to an X-Ray of the same object mounted in a lightbox. Here, one is reminded more of what can and cannot be seen by other means. When and where does something appear “real”? Or, more simply, how does this work get past airport security?