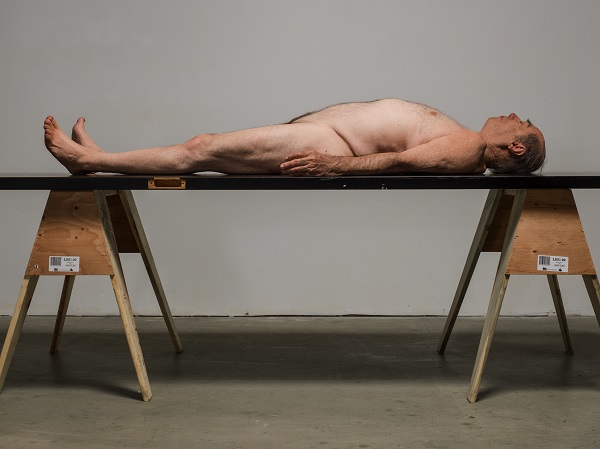 Paul McCarthy often emphasises the grotesque and absurd ways in which the body is implicated and represented across the contemporary landscape of media culture. Performative videos, immersive installations, large-scale inflatables and hilariously disturbing sculptures are layered with pop, art criticism, sex and psychology.

McCarthy began his nearly five-decade career doing live performances involving masks and props, but he later packed them into trunks, and exhibited them closed in a final decisive gesture. Since then his work has featured imagined and mainstream characters, like Snow White, George Bush, and Santa Claus, with the artist physically absent.

Now, at Schinkel Pavillon, McCarthy’s body is present again – in the form of a lifeless object, unceremoniously presented on a table made of an old door and sawhorses, in the middle of an octagonal room that feels overwhelmingly like a mausoleum. The ephemeral goes head to head with the finality of death in the memento mori Horizontal: an exact replica of McCarthy laying slack, with eyes closed. The utter vulnerability in the loose flesh resting against the table, sunspots, wrinkles, flaccid penis and all, renders a visceral picture of mortality that prompts a surge of compassion, and then you remember this body is just a thing. You wait for it to move. You repress the impulse to touch it.

Off to the side you encounter the only other object in the room, Rubber Jacket H, Horizontal, a bluish-grey mound on the floor shaped vaguely like a lumpen body. The position of its limbs verifies that it must be the cast used to make Horizontal. While its presence confirms that Horizontal is not in fact the artist’s dead body, its sunken torso and gaping breathing hole at the nostrils still manages to unsettle. One floor down, the installation That Girl T.G., Drawing Table-Drawing is made of a multi-channel video playing on six screens that show a nude female model sitting or lying on a table, legs splayed, as McCarthy loosely traces the shadows cast by her body. The model, who is young, lean, and symmetrical, provides a stark contrast to McCarthy’s double upstairs. But her own body double, or ‘life cast’, which was realised in 2012-13, is absent. Here we see her not as a vulnerable body, but as a series of flat, distant images. In a third room we see Science Fiction, E T.G., six large neon photographs of the same model’s face. We learn from the text that these images were made using a photo light scanner, and were taken in order to create future life casts. How many will McCarthy make until he achieves a ‘perfect’ copy?

The exhibition realises a panoptic approach to existentialism that’s playfully semiotic and thoroughly captivating. The kaleidoscopic mirroring across works is cerebral and memorable. While McCarthy’s signature shock is still there, the viewer is given the space to consider the real versus the metaphysical and the time to revel in the ecstasy of the existential.