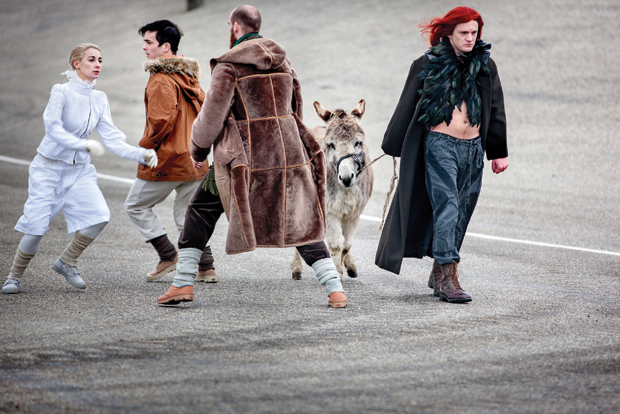 British film director Peter Greenaway and Dutch theatre and visual artist Saskia Boddeke recreate the sacrifice of Isaac in Obedience, a massive multi-media installation at the Jewish Museum opening May 23.

The Akedah, or “binding of Isaac”, is a staple in Jewish, Christian and Muslim traditions. While it’s told differently by each religion, the basics are the same: under instructions from the Almighty, Abraham ascends Mount Moriah to sacrifice his son Isaac, only for an angel of God to intervene at the last minute.

In Boddeke and Greenaway’s retelling, religious Renaissance-style art is mixed with video installation and live dance, turning the visit into an immersive three-dimensional experience. Brought 2000 years back to stand on the mountain where Abraham almost sacrificed Isaac, the visitor is invited to walk through 15 rooms describing the story through various viewpoints: Jewish, Muslim, Christian, the sacrificial lamb awaiting slaughter, the mother viewing her son. The exhibition also focuses on Ishmael, Abraham’s first-born but less favoured child, considered to be the forefather of Islam – and, according to the Quran, the true subject of Abraham’s sacrifice. An opening video featuring young people stating “I am Isaac” or “I am Ishmael” uses the parable of the two sons to allude to children caught up in modern-day wars.

Greenaway, last seen at the Berlinale with his latest film Eisenstein in Guanajuato, and spouse Boddeke, known for her recent work on the virtual reality platform Second Life, have previously collaborated on theatre and multimedia installations such as the Rotterdam Maritime Museum’s Sex and the Sea.

How does this installation differ from the theatre collaborations you two have done before?

SASKIA BODDEKE: It is different because you aren’t working with live actors. But this also gives the visitor the possibility to take their own time and tempo to see it – someone can maybe see it in a half an hour and have a complete experience, and others can stay there half a day. Or I hope that will be the case. The whole story is combined with dance – the dance brings emotion into the installation.

How does the partnership work between the two of you?

SB: “Saskia Boddeke and Peter Greenaway” is more like a brand name. This is the type of installation that we create. How our collaboration starts and where it ends – that’s very much breakfast table secrets. We finally found a modus and it works.

PG: I think the general way of describing it is that we’re questioning subconscious notions of what makes an exhibition. We are not really breaking things down into journalistic segments: “This is cinema and this is video and this is painting.” We’re using the definition of artwork going back 2000 years as having to entertain, but also to instruct. The content here is very powerful in traditional and historical terms, but also very, very relevant to the year 2015.

Your exhibition turns the story into an examination of how people are affected by war – a very modern topic.

SB: That’s what the aim was, that the child Isaac is standing for the children and young adults who are sent into war. Isaac for us symbolises those people.

The exhibition mixes these contrasting elements of Renaissance art and post-modern installation – how are those connected for you?

PG: People forget, you couldn’t have Jeff Koons without Andy Warhol, you couldn’t have Warhol if you didn’t have Marcel Duchamp, you couldn’t have Duchamp without Romanticism. And you couldn’t have any of that without the Renaissance. We want to introduce the laptop generation to the notion of the cultural explosion that once was. Rembrandt, Michelangelo and Raphael, are as relevant, I would say – and I’m putting a very subjective scan on this – as Warhol and Koons.

So are you saying there’s no such thing as a new idea?

PG: You know and I know that most artists only have one or two ideas, and spend their whole life re-working them. But if those ideas are very big, there is no end to a theme.