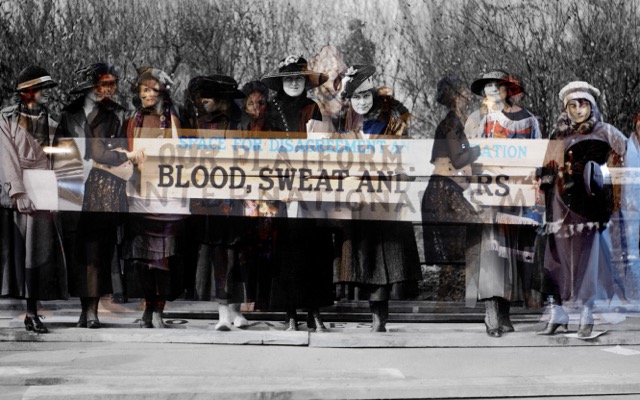 Palm trees and sunflowers line the blissful and baroque Körnerpark in the middle of bustling, urban Neukölln. Here, “Sweat, Blood and Tears – Assembling Past and Future” is on display until September 4.

Berlin-based, Dutch artist Mathilde ter Heijne, along with her research team, has turned the indoors of the Galerie im Körnerpark into a feminist utopia. The first Woman’s Peace Assembly in 1915 at The Hague is the springboard for contemporary discourse. Here, in the exhibition which wants to remind us through photographic postcards and video portraits that feminism today – as then – is based on the visibility and collectivity of its players, paying tribute to the sisters that fought so hard in the past and still do so today for a non-violent world.

Mirroring the outdoors and paralleling the historical photographs of the International Peace Congress, real palm trees – the symbol of utopian paradise – stand potted and planted throughout the gallery space, giving the place a hot greenhouse vibe. The suffragettes from 1915 protested World War I. In Körnerpark this pacifist plea lingers and experiences an urgent renaissance in the face of current geo-political crises. The exhibition’s title lauds the bodily juices and the hard work that go into revolution, progress, and peace. A selection of role models provide hope for the future. Motivated by the idea of “utopia”, a potential zone to talk peace and credit great minds of revolutionary thought takes shape in the frame of the gallery. In the form of video portraits, educator and peace activist Florence Holbrook and suffragettes the likes of Susan B. Anthony gain visibility. Current social, political, and feminist organisations like the Women’s International League for Peace and Freedom contributed to the project’s plans. Therein, new and old visionaries share footage and the floor.

Elegantly walking the fine line between new media fine art and the aesthetics of revolution, the exhibition takes raw DIY elements and mixes them with slick gallery touches. “Woman to Go” collects thousands of diverse ladies, making-up a wall of remembrance. This work consists of take-away Daguerreotype postcards of anonymous woman that history has left out,  lining this wall from floor to ceiling. The static portrait, a method to manifest, becomes a mobile postcard. Taking this format a step further, videos of 24 artists, activists, and academics stand on wooden easel-like structures. Each portrait is a monologue – in colour – of a contemporary, layered as a moving image on top of the still image of a black and white photograph of a heroine of history. Voices include the 2005 Nobel Peace nominee Fatmire Feka. The footage of a woman from 1915 with the face of a woman from 2016 fitted to hers, blurs the lines between past and present. Their thoughts become timeless.

Spray-painted wooden benches sport neon pink, green, and orange political slogans like “you are never alone, you are a signal”. Acting as docks to incite protest or generate camaraderie, they invite to contemplate and listen together. These individual stories culminate in a large screen projection, reenacting the peace conference. Throughout the notion of assembly is the leitmotif, a collective event assembles. On the first of September a symposium on radical peace will do just that, followed by a performance series on the 4th. In effect, taking its cues from “her-story”, Mathilde ter Heijne and company has successfully created what Michel Foucault would have deemed a heterotopia, an oasis outside of hegemonic power structures. Pleasing to look at but also thought-provoking in its message, this exhibition sets up a good blue print for a feminist utopia: keep up the good fight, peacefully.